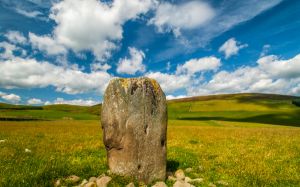 The Glebe Stone is a solitary standing stone in a farm field just west of Yarrow. The stone has a pair of possible cup-marks on one side. It stands 4'6" high and tapers slightly towards the base.

There was originally a cairn surrounding the stone, and when excavated the cairn revealed decomposed bone remains. At the base of the stone are small stones and boulders (possibly just residue of field clearance).

Several other standing stones are nearby, including the Yarrow Stone just up the road. According to an old story, the Glebe Stone and Yarrow Stone are reminders of a local feud. The stones mark two lords who fell in battle, while their followers were buried in a marshy area in the nearby haugh, or hollow, called the Dead Lake.

The stone is visible from the A708 and access across the field is easy. 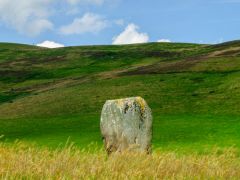 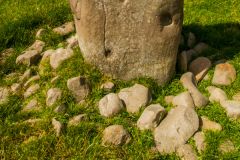 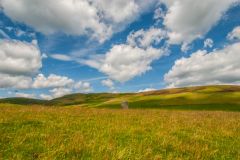 More self catering near Glebe Stone >>