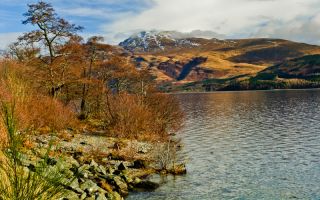 Ben Lomond
Ben Lomond is one of the most popular walking areas of Lowland Scotland, partly because of relatively easy access from large population centres like Glasgow, and partly because the hill walks are relatively easy, allowing people with limited outdoor skills access to a beautiful area of countryside, with superb views over the nearby Loch Lomond and the Trossachs National Park.
There are trails to the top of Ben Lomond itself and to several nearby peaks, but also low-level trails through attractive woodland. You can also take a waterside walk along the shore of Loch Lomond, following the West Highland Way long distance trail, or explore the nearby Forestry Commission woodland. If you don't fancy exercise at all, but still want to get a taste of the exceptional scenery, take a cruise on the loch from Luss or Tarbet.

If you want to climb Ben Lomond itself, the route begins at the public car park at Rowardennan and will take a person of average fitness about 5 hours. The route is 7.5 miles long and ascends some 990 metres. The route is generally well maintained but some sections may be muddy.

Most of the Ben Lomond area is included in a designated Site of Special Scientific Interest (SSSI), a recognition of the range of upland habitat.

One way to get the most out of a visit to Ben Lomond is the Ardess Hidden History Trail, which takes in several heritage related sites. Pamphlets detailing the walking route are available from a dispenser outside the ranger station at Ardess Lodge.

The route takes in the remains of Victorian kennels from the days when the gentry flocked to Ben Lomond for hunting. The trail then passes the ruined shell of an 18th century mill, the remains of rig and furrow cultivation and iron smelting, and meanders through 18th century oak woodland. You can spy the remains of a traditional turf-built cottage and several stone houses dating back at least 250 years.

Nearby accommodation is calculated 'as the crow flies' from Ben Lomond. 'Nearest' may involve a long drive up and down glens or, if you are near the coast, may include a ferry ride! Please check the property map to make sure the location is right for you.

More self catering near Ben Lomond >>