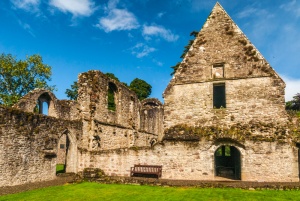 The Chapter House at Inchmahome
A lovely monastic settlement on an island in the middle of Lake Menteith, Inchmahome was briefly the home of Mary, Queen of Scots. Inchmahome was built in 1238 by Walter Comyn, the Earl of Menteith, for a group of Augustinian friars.

The island is quite small, perhaps 75 metres in any dimension. It is wooded, creating an atmosphere of peaceful rural calm. The remains of the priory include the roofless church, cloisters, chapter house, and domestic quarters for the monks. The west doorway arch of the priory church still stands, and the nave of the church is in good repair.

Aside from this, the most impressive aspect of Inchmahome is the chapter house, where several very well preserved 13th and 14h century effigies are found, including that of Sir Walter Stewart (d. 1295) and Countess Mary. These effigies were originally in the priory church but were moved to the chapter house for preservation. 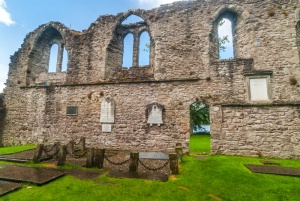 The nave of the priory church

At least two famous Scot royals have visited Inchmahome. The first was Robert the Bruce, who came three times, in 1306, 1308, and 1310. The second was Mary, Queen of Scots, who stayed at Inchmahome for three weeks in 1547. The child queen was only four years old at the time and was brought to Inchmahome by her mother, Marie de Guise, for her own protection after the heavy Scottish defeat at the Battle of Pinkie.

As the tourist brochures are fond of pointing out, Menteith is Scotland's only 'lake' as opposed to the multitude of 'lochs'. The lake is only about 1.5 miles long and one mile wide, and within the lake are several small islands.

One of the islands is Inch Talla, which houses the crumbling ruins of a medieval castle, home of Walter Comyn, founder of Inchmahome Priory. The castle is in ruins but can be accessed by boat (see below). 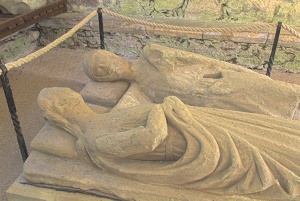 13th-century effigies of Sir
Walter Stewart, Earl of
Menteith, and his countess,
in the Chapter House

The priory can only be reached by boat from the pier on the B8034 at Port of Menteith, just off the A81. Visitors will need to raise a flag on the end of the pier, which will alert the ferry pilot to come and fetch you. The journey is not long, perhaps 7 minutes in good weather.

There is no regular access to the castle on Inch Talla, but as the Britain Express family was staying at a self-catering cottage on the shore of the lake we were able to use a rowboat and row to the island. Boats can also be hired at Port of Menteith, but any access to the priory is only by the official Historic Scotland ferry.

Half the fun of visiting Inchmahome in a family group is the boat ride to get there. Our children had a wonderful time, The island itself provides a beautiful setting for the priory. There are trails through the woods, allowing visitors to explore the beautiful surroundings. We enjoyed our trip immensely. 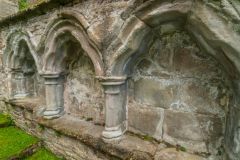 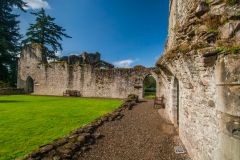 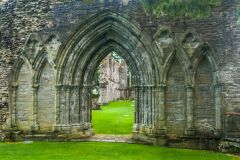 More self catering near Inchmahome

More bed and breakfasts near Inchmahome