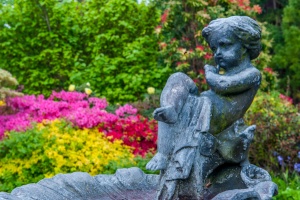 A wonderfully diverse and colourful garden on the north bank of the River Clyde. Geilston covers 10 acres, centred on a walled garden, with restored Victorian greenhouses, and a peaceful wooded area with a burn running through it, interspersed with small waterfalls that add a literal splash of sound to an otherwise peaceful ambience.

The garden was begun in the late 18th century around the late 17th-century manor house (not open to the public), and combines three main areas; a woodland garden with a small stream, or burn, running through it, a walled garden, and a kitchen garden. The origins of the manor go back in time as early as the 14th century, but the house we see today dates to around 1766.

In the middle of the 18th century Geilston was purchased by a successful tobacco merchant from Glasgow named James Donald. In 1805 the estate was sold to the Geils family of Greenock; at that time the north bank of the Clyde was a popular area for the merchants of Glasgow to settle, and the area around Helensburgh was very popular. 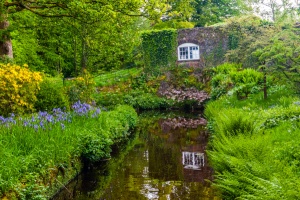 The walled garden stands immediately beside the manor house and is built around a 100-foot high Wellingtonia, thought to be over 250 years old, with the added colour of azaleas in spring and lush herbaceous borders in summer.

The walls stand roughly 15 feet high and date from the late 18th century (the date 1797 is carved on the old potting shed). It seems very likely that this area was intended as a pleasure garden from the outset.

At the rear of the walled area are greenhouses built by the Mackenzie and Moncur company. These have recently been restored and are one of the highlights at Geilston. Built onto the walled garden is the 1797 potting shed with a secret window looking out over Geilston Burn (you can see the window from the footpath on the far side of the burn).

In addition to the colourful walled garden and woodland garden is a sizeable orchard and kitchen garden, which provides vegetables and fruit for sale to visitors. The kitchen garden is sheltered by a high beech hedge. The garden is perhaps at its best in Spring, when there are bluebells carpeting the woods, with daffodils, wood anemones, rhododendrons and azaleas each adding a dash of colour.

I can sum up Geilston very succinctly; as I was exploring the garden I kept thinking to myself 'my wife would love this place'. No higher praise can I give! It is a lovely garden in a wonderful historic setting. 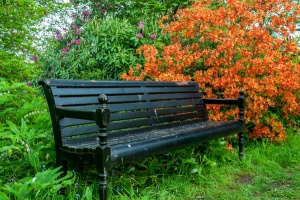 A quiet bench in the woodland garden 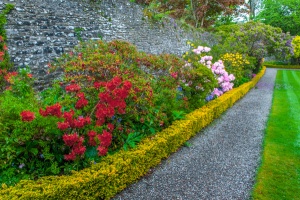 Colourful borders in the walled garden 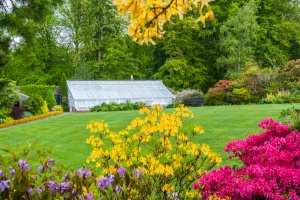 Looking across the walled garden 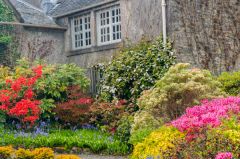 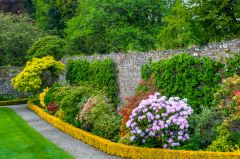 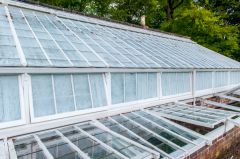 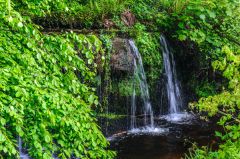 Nearby accommodation is calculated 'as the crow flies' from Geilston Garden. 'Nearest' may involve a long drive up and down glens or, if you are near the coast, may include a ferry ride! Please check the property map to make sure the location is right for you.

More self catering near Geilston Garden