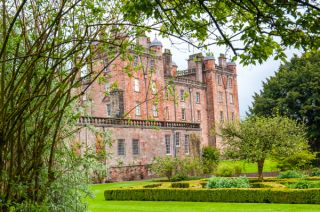 Drumlanrig Castle is a Douglas stronghold, home of Dukes of Buccleuch and Queensberry. This elegant pink sandstone turreted castle was built 1679-91 around an earlier medieval castle. The lush interiors feature paintings by Leonardo, Holbein and Rembrandt, collections of French furniture, and carvings by Grinling Gibbons.
History
Robert the Bruce harboured two great ambitions. One was to oust the English from his homeland and take his place on the Scottish throne. The other was to go on Crusade, fighting for the Cross against Islam. As history tells us, he achieved the first ambition, but the second he never managed during his lifetime. Note the wording of that last sentence, for after King Robert died his great friend and supporter Sir James Douglas helped the dead king fulfil his wish even after death. When Douglas left to join the Crusading battle against the Saracen army in Spain, he took with him Robert Bruce's heart in a silver casket.

Douglas was mortally wounded in a skirmish with the Moors, but gathering his strength, Douglas hurled the casket into his enemies and charged after it, crying aloud 'Forward, brave heart!'. He died, but his enemies were impressed with his courage that they returned the casket to the Crusaders. Douglas's heroic death inspired the family symbol of a crowned heart with wings.

Was the story true? Well, large parts of it, certainly, but whether Douglas ever actually uttered the words which are attributed to him is up for debate. 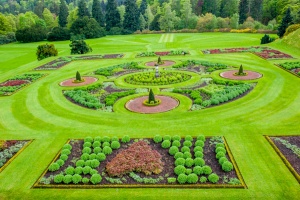 Formal terraced gardens
(note the Douglas heart)
What is certain, however, is that the Douglas heart symbol appears everywhere at Drumlanrig; on carpets, heraldic wall panels, stamped on leather, wrought in iron, gilded on a mirror frame. Everywhere you look is a reminder of the Douglas past.

The Douglas family owed their lands in Nithsdale to a grant from Bruce, and within a century of the king's death they built a strong fortress here. This medieval castle forms the basis of the castellated mansion we see today. The fairy-tale castle bristles with turrets and domes, and follows the same floor plan as the medieval castle; a simple rectangle built around an inner courtyard. This is the work of William Douglas, Lord High Treasurer of Scotland and later to become the 1st Duke of Queensberry.

The Duke had an interesting way of dealing with the astronomical bills for creating his new castle; he locked them in a box, sealed the box, and cursed it. He wrote a dreadful warning on the cover of his accounts book, which translates loosely as 'The Devil pick out the eyes of anyone who looks in this'. The sealed box remains unopened. 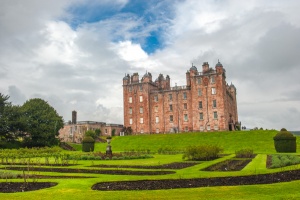 Another view of the castle exterior
Over the centuries the Douglas owners of Drumlanrig merged with two other noble Scottish families, the Buccleuch and Montagu families. Today the house provides a fascinating look at the intertwined fortunes of these three noble families.

Bonnie Prince Charlie stayed here on his retreat northwards on Dec. 22, 1745, and there is a collection of his memorabilia, but what is most impressive at Drumlanrig is the superb collection of fine art, including a stunning chandelier weighing almost 200 pounds, fine furniture, porcelain, and needlework - including a piece said to have been worked by Mary, Queen of Scots. The most famous work of art at Drumlanrig is Rembrandt's 'An Old Woman Reading', a simple painting of a cowled woman, her face lined with age, attentively bending her head towards a book held in both hands.

That may be the highlight of the interior, but frankly, I think the gardens are equally impressive. It was grey and drizzling when we visited, but even in the wet, I found the gardens below the house to be utterly superb. There are formal terraces and stands of trees, with clipped hedges carefully contoured to create geometric patterns. And, of course, there are shapes of the Douglas heart everywhere you look!

The Queen's Visit
The castle is beautifully situated among wooded hills, and is approached by a mile long avenue lined by trees. There is a story behind the avenue, as related by our extremely entertaining guide. The avenue was specially created for a visit by Queen Victoria. Lavish entertainment was planned, and mountains of food prepared for the royal visit. On the day of the visit, word arrived that the queen would not be coming. The Duke was livid, but one hopes he was able to mask his irritation the next time he had a royal audience! 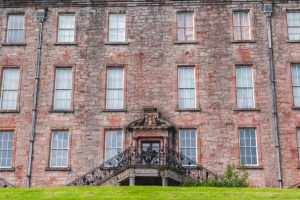 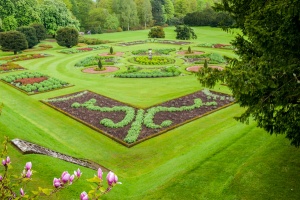 Formal gardens on the lower terrace 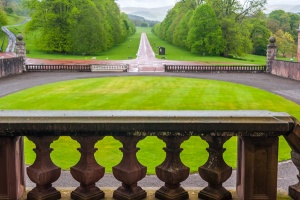 Looking down the long entrance drive - fit for a queen 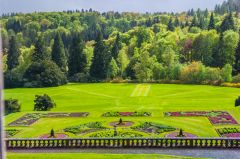 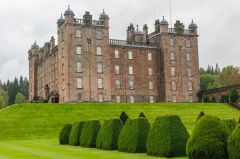 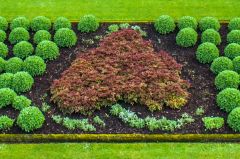 More self catering near Drumlanrig Castle >> 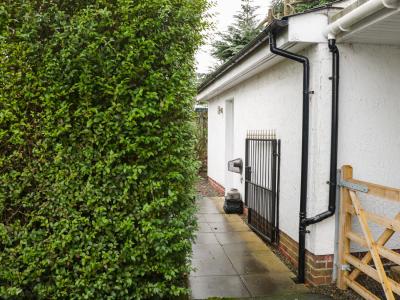 This detached cottage is located in the village of Thornhill near Dumfries and can sleep two people in one bedroom.
Sleeps 2 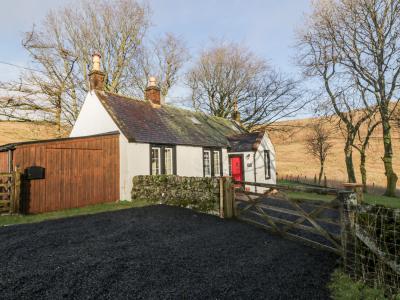 This detached bungalow rests near the village of Thornhill in Scotland and can sleep four people in two bedrooms.
Sleeps 4