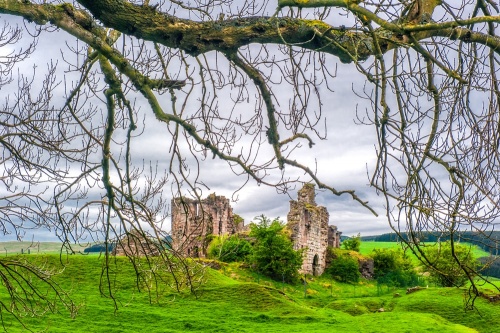 On the southern approach to the old royal burgh of Sanquhar stands the ruins of a medieval castle defended by earthworks and a curtain wall. The origins of Sanquhar Castle are not clear, but it may have been begun by the Ross family, who held Sanquhar in the 13th century.

The earliest part of the ruins we see today is a late 14th-century tower on the south side of the castle. This was erected around 1370 by the Crichton family, who gained the castle by marriage with a Ross heiress. The site as obvious strategic advantages; the castle looks down on the River Nith to the west and to the north flows Townfoot Burn. To supplement these natural defences a ditch was dug on the east and south sides of the site.

The tower stands four storeys high. A curtain wall was added around 1400 in the north-east corner of the site. Around 1450 a tower house and drum tower were built, along with a curtain wall in the north-west corner. A range of courtyard buildings was added in the 16th century. A 17th-century wall encloses a large trapezoidal courtyard. Several service buildings are built into this outer wall. 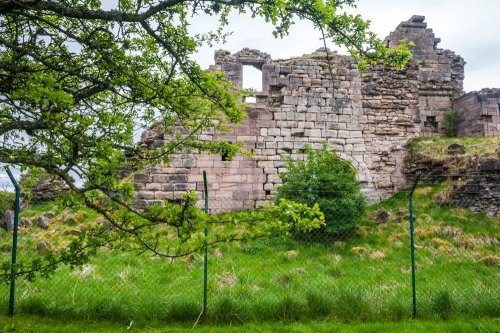 A section of ruined wall

Sanquhar saw action on multiple occasions during the Scottish Wars of Independence. It was captured by both English and Scots in turn during the conflict. William Wallace visited the castle as did Robert Bruce. So too did Edward I of England and his son, Edward II. Centuries later Mary, Queen of Scots came to Sanquhar as did her son James VI.

The Crichtons had a colourful history. One lord of Sanquhar Castle was Sir William Crichton, Chancellor of Scotland. On one memorable occasion in 1440 Crichton invited the 6th Earl of Douglas and his brother for dinner at Edinburgh Castle, a meal that has gone down in history as the 'Black Dinner'. Crichton wined and dined his guests and the had the brothers murdered. 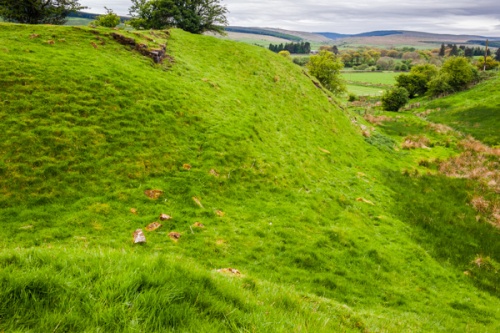 His heirs, however, reversed the move and from 1690 Drumlanrig became the main family residence and Sanquhar Castle was allowed to lapse into ruin. The fabulously wealthy 3rd Marquess of Bute began rebuilding the castle in 1896 but the project was abandoned when the Marquess died in 1900. You can clearly see the more solidly-built sections of the castle buildings that the Marquess was able to restore before his death.

The castle is reputedly haunted by two spectres. One is a White Lady said to be Marion of Dalpeddar, who disappeared in 1580. One version of the story says that she was murdered by one of the Crichton lords of Sanquhar. It might be easy to dismiss this story as nothing but a tall tale, but in 1875 archaeologists excavating a foundation wall discovered the skeleton of a woman inside a wall. Could this be Marion's skeleton?

The second ghost is said to be that of John Wilson, who was wrongly hanged by another Crichton lord. Wilson's ghost manifests itself by piteous groans and a rattling of chains. 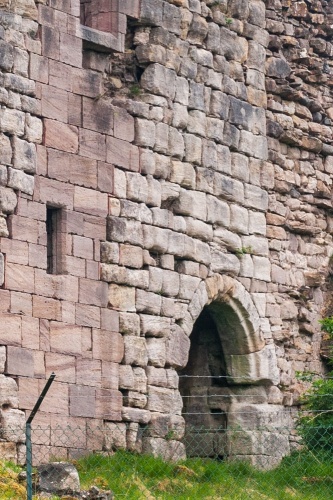 A restored section of the tower wall

The castle is just off Castle Street (the A76) at the south-eastern edge of town. The Southern Uplands Way long distance footpath passes within sight of the castle ruins. There is no dedicated parking, so we suggest parking in the town centre and walking. The castle is easy enough to find, but due to the risk of falling masonry, the ruins have been fenced off. You will have to be content to view the ruins from a distance, as we did. You can still get a very good sense of the castle layout and the sheer scale of the castle site. The earthworks, particularly on the eastern side, are still quite imposing.

More self catering near Sanquhar Castle

Self Catering near Sanquhar