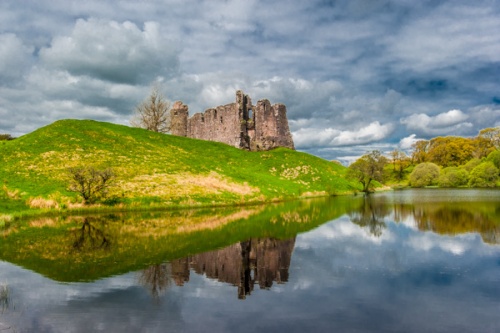 A wonderfully atmospheric ruined castle dating back to the 13th century on a headland overlooking Morton Loch. The first fortress here was said to have been built in the 12th century by Dunegal, the Lord of Nithsdale.

There was certainly a castle by the 13th century, and by 1307 the Barony of Morton was granted to Thomas Randolph, Robert Bruce's son-in-law. Thomas later became the first Earl of Moray.

In 1357 that early fortress was torn down under the terms of the Treaty of Berwick, which called for several castles in the south-west of Scotland to be destroyed in exchange for releasing David II from captivity in England. The destruction at Morton was not complete, but half of the original medieval gatehouse was lost forever.

In 1396 Morton passed into the hands of the Douglas family. Sir James Douglas, 1st Earl of Morton, took his title from the castle, but it later passed to the Dukes of Queensberry and then, in time, to the Dukes of Buccleuch. 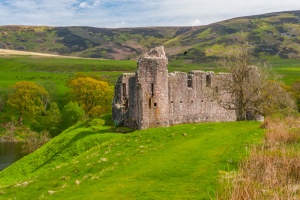 In 1588 Morton was sacked by James VI as part of his successful efforts to break the power of the Douglases. The castle was only partly reoccupied, and by the start of the 18th century, it was abandoned. Despite much of the stone having been scavenged for other building projects, two towers still stand to a good height, with walls reaching 26 feet in places.

The castle stands on a triangular headland, with the loch on two sides, and a ditch, now filled in, on the landward side. The layout is rectangular, with a south-west gatehouse and a circular tower at the south-east corner. Medieval tiles found at the site are now held at Dumfries Museum.

One of the most impressive features is the gatehouse, though this now only survives on one side. You can see evidence of the vaulting ribs that supported a passage through the gatehouse into the castle interior.

Within the rectangular enclosure, there is little evidence of any structures, though the sheer height of the walls is impressive enough! You can see a very nicely framed fireplace at the far end, and a pair of slop drains set into the walls. At the far right corner is a stair which gave access to the lord's private quarters. 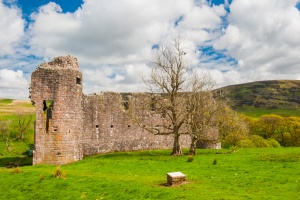 In the outer face of the wall you can see traces of supports for secondary buildings to the north of the hall.

In the 19th century, the Buccleuch owners decided to restore Morton Castle, and you can see a line of thick clay tiles marking the point where new masonry was added to the original medieval walls.

I hate to say it, but Morton Castle is one of the worst signposted historic sites I've ever visited. Even when you're almost on top of it, you don't know it is there. Which is a blasted shame, because it is a fantastic location, and I absolutely loved visiting.

Historic Scotland simply says to take the 2nd turn on the right past Carronbridge on the A72. Unfortunately, that only tells part of the story. Ready to take notes? Right, here we go. From Carronbridge follow the A702 north and take the turning to the right as noted. Follow a very narrow road over a crossroads, past a house on the left, and up what rapidly resembles a forest track, full of more potholes than pavement.

There is a small reassuring sign to the castle, so carry on up the track until you come to a wide spot where another road branches off to the right. There is a small sign about a Morton Heritage trail, but nothing whatsoever about a castle. You can just see what appears to be a stone farm building or dovecot poking above the hills off to your left.

It doesn't look like it, but that is actually the top of the gatehouse tower of Morton Castle. Walk through a gate and a turf track that becomes apparent, and the curve of the land falls away so you can see the castle before you.

It is quite a breathtaking moment, for until that first glimpse you have no clue just how impressive the castle ruins are. So here's a plea to Historic Scotland; for goodness sake improve the signs, and, if possible, the road. Morton is a wonderful historic site set in a quite fantastic location. More people would enjoy visiting! 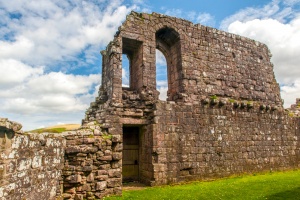 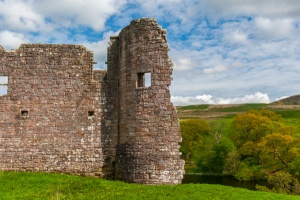 The eastern tower and
countryside setting 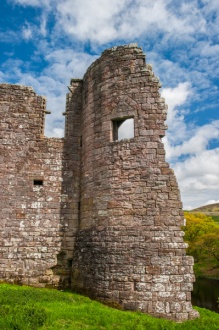 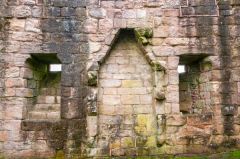 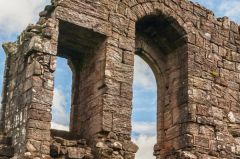 More self catering near Morton Castle >>