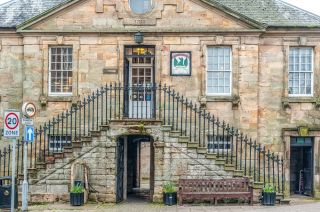 This fascinating museum of local history covers Sanquhar's rich history as a centre of the knitwear trade and the mining industry. Other major parts of the museum deal with local literature, the social history of Nithsdale, and what it was like to be held in Sanquhar gaol.

The museum is housed in the 18th-century Tolbooth, a distinctive building at the upper end of the High Street that once served as a gaol and courthouse.

We came to Sanquhar late in the day after a very long day touring historic sites in Dumfries and Galloway. In fact, we only had about 30 minutes to explore the museum before they shut for the day. No problem, I thought to myself; we'll just zip through, see a few highlights, and be on our way.

No chance. There was way too much to see, and all of it interesting. In the end, the museum staff had to kick us out so they could lock up for the evening.

For me, the most interesting feature of the museum was learning about Sanquhar's history as a centre of the knitting trade, particularly how the very individual styles of knitting developed and the intricate patterns that came to be associated with the local knitwear industry. If that doesn't immediately sound fascinating, well, all I can say is, visit for yourself and see!

Sanquhar Knitting is noted for its distinctive two-coloured pattern. It developed in the 18th century as a cottage industry, and Sanquhar found itself the centre of an inland market trade of national importance. There was an annual Wool Fair, held each July, which set prices for wool throughout the south of Scotland. The museum has a variety of modern and historic wool patterns and examples of knitwear from mittens to hats.

As a side note, if you walk down the High Street you come to the Whigham's Inn, visited by Robert Burns during his time as an excise man. A plaque on the outside of the inn tells us that Burns inscribed a poem on a pane of glass inside the inn. Also on the High Street is the pretty Post office, opened in 1712 and the oldest working post office in Britain. 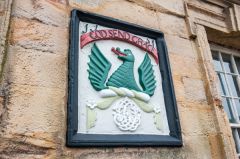 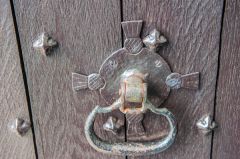 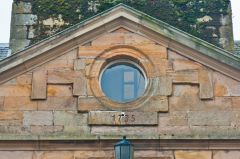 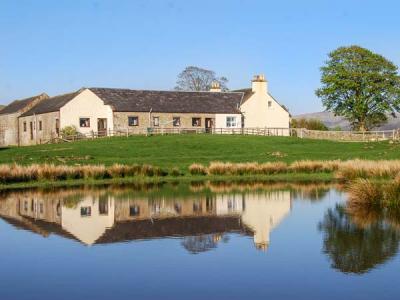 This terraced cottage is in the town of Sanquhar near to Dumfries and can sleep four people in two bedrooms.
Sleeps 4