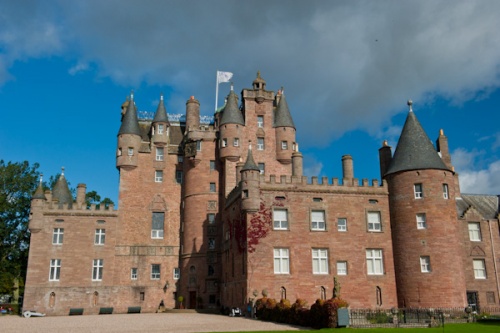 The home of the Earl and Countess of Strathmore and Kinghorne, Glamis Castle is famous for its associations with the royal family, in particular as the childhood home of Elizabeth, the Queen Mother. However, there is much more to Glamis than royal connections. The history of the castle goes back to at least the 14th century.

In 1376 King Robert II granted the Glamis estate to John Lyon, Lord Glamis, who rebuilt an existing fortified house on the site. Lord Glamis's new castle was a simple L-plan tower house, and it is this 14th-century building that still forms the core of the current castle.

The tower house was expanded and strengthened numerous times over the ensuing centuries, notably during the 18th and 19th centuries. The result is a superb historic residence that resembles an ornate French chateau, full of history, with superbly furnished state rooms. Every room - except the chapel - is decorated with lions, the symbol of the Lyon family.

Students of Shakespeare will remember Glamis as the site where Macbeth murdered Duncan to become king of Scotland. Unfortunately, historians have to pour cold water on the tale; King Malcolm II was murdered here in 1034, probably at Glamis, but not by Macbeth. However, Glamis has certainly had its fair share of famous visitors over the years; Mary, Queen of Scots stayed here, as did her father, James V (see below). 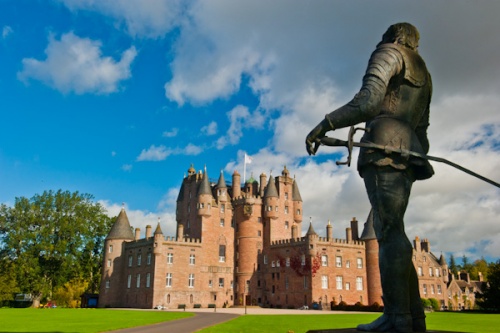 A more recent royal connection is the best known; Elizabeth Bowes-Lyon was raised here (she was not born at Glamis, as is sometimes mistakenly claimed). Elizabeth grew up and married Prince Albert, later to take the throne as George V. The couple spent part of their honeymoon at Glamis, though unfortunately, Elizabeth contracted whooping cough during her stay! Princess Margaret, sister of Queen Elizabeth II, was born at Glamis in 1930, the first royal baby born in Scotland since the future Charles I in 1600.

Glamis claims to be one of the most haunted castles in Britain. Among the spectres you may (or hopefully, may not) encounter, is the spirit of Janet Douglas, Lady Glamis. In 1540 Lady Janet and her two sons were accused by James V of being in league with the devil. In reality, James wanted Glamis for himself, and the charges were little more than a convenient pretext.

Despite public protests, The trio were imprisoned in dreadful conditions in Edinburgh. The lady and her eldest son were executed, and the youngest son would have been as soon as he reached the age of sixteen. A few days before the execution date, King James died, and the youth was spared.

Years later, when James's daughter Mary, Queen of Scots, visited Glamis she apologised to the Lyons for the actions of her father. The ghost? Ah, it is said that Lady Janet visits the chapel regularly. Those who see her spectre report feeling uplifted and joyful, so she's not a ghost to be feared.

Another ghost at Glamis is the spectre of a young serving boy who was bid to sit on the stairs until given a task to perform. There he sat, forgotten, until he died in the chill of the night. His ghost is said to stick out a leg and trip up unwary people as they descend the steps.

Another pair of ghosts are said to inhabit a secret chamber. There they play cards (or dice, depending on which version of the story you prefer). Hardly a dreadful tale, but wait, there's more! The two gamblers were so involved in their game one Saturday night that when servants came to tell them it was almost the Sabbath and they should stop, they merely laughed and said that they would play forever if they chose.

A stranger came in as they spoke, and sat down to play with them. It was the devil, and he took them at their word. Now they play for eternity, never to leave their gaming hole. It is said that if you put your ear to the door of the chamber when the bell tolls midnight on Saturday night, you will hear a mournful sobbing.

The castle is well signposted from all major roads. It can be very busy, especially in summer, and is a popular destination for tour buses, so you might want to plan a visit for first thing in the morning to avoid the throngs. Glamis can only be visited by guided tour; these take about 1 hour on average, and visit the main staterooms, passing from the oldest parts of the medieval castle to the most modern and sumptuous state rooms.

The tours are very good, and certainly don't rush you through; there is plenty of time to explore each room. There is also an exhibition area which you can explore on your own, a good shop, and restaurant facilities.

Glamis village is very pretty and has several interesting places to visit, including the Angus Folk Museum (seasonal opening). Almost opposite the museum is the Glamis Stone, a Pictish cross slab. The stone stands in the garden of the manse, across from the parish church. The manse is private property, but you can easily see the stone from the garden gate. Tradition says that the carvings on the stone commemorate the death of King Malcolm II at Glamis. A hundred yards from the manse, just inside the exit gates of Glamis Castle, is an ancient holy well, signposted as St Fergus's Well.

It is well worth taking the time to explore the grounds and gardens surrounding the castle. A few steps from the main entrance is the grandiose Great Sundial, built in 1671, and at 7 metres high one of the largest sundials in Scotland. There are fully 84 dials arranged about the remarkable structure, one of the last surviving bits of the original 17th-century gardens at Glamis.

Flanking the entrance drive stand statues of James VI and I, and Charles I, looking suitably martial. Immediately beside the castle are the small Dutch Gardens, designed for the 13th Earl in 1893. These gardens are reserved for the family, but visitors can enjoy the Italian gardens laid out by the Queen Mother's parents in 1910. In the parkland surrounding the castle are several notable trees, including the Culloden Chestnut, planted following the Battle of Culloden in 1746. In the early 20th century the chestnut was a favourite play area for the young Elizabeth Bowes-Lyon, the future Queen Mother.

Note: You can cause great amusement to locals by pronouncing the name 'Glamis' phonetically. Despite every appearance to the contrary, the 'i' is silent, and an approximation of the correct pronunciation is 'Glahms'.

More self catering near Glamis Castle >>