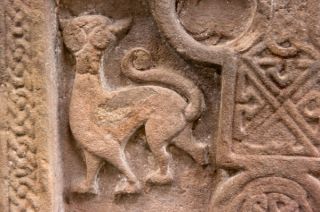 The former village school houses an outstanding collection of red sandstone early Christian monuments, including cross slabs, recumbent gravestones, architectural carved stones, and a hogback grave stone. There are also displays illustrating life and art of the Picts who produced these outstanding works of sculpture.
There are 26 Pictish stones in the museum, dating from the 8th to the late 10th century. The collection at Meigle is one of the finest and most historically important in all of Europe, and suggests how important this area was in the long vanished Pictish world.

Among the highlights at Meigle is Cross-slab 1, the oldest stone, dated to the late 8th century and covered with intricate carvings representing horsemen, animals, and traditional Pictish symbols. There is also a 9th century prayer cross called Meigle 2, that for many years stood by the churchyard entrance. This is perhaps the most impressive of the carved stones. It stands roughly 8 feet tall, with a wheel-headed cross on one face, and interlaced carvings of animals on the shaft. The reverse of the stone shows a carving of Daniel in the lion's den, surrounded by hunting scenes.

Queen Guinivere's Stone?
A fascinating legend attaches to this stone. According to local legend it is said that the stone was erected over the grave of Vanora, the Guinivere of Arthurian legend. according to the tale, Vanora was kidnapped and violated by Mordred, and held at Berry Hill, near Meigle. When she returned to Camelot, Arthur sentenced her to be torn apart by wild animals. The carving of Daniel and the lions is said to represent this tragic event.

Among the other stones on display is a grave slab richly carved with likenesses of birds, animals, horsemen, and naked figures.

Perhaps even more historically important than the carved slabs are the fragments of building materials. No church architecture of any significance survives from the Pictish period of Scottish history, so the fragments at Meigle are enormously important, and point to a building of no little sophistication at Meigle, probably a royal villa under King Pherath (839–42), the last Pictish king to rule the area before the Picts were unified with the Scots under Kenneth Macalpine. Current thinking by historians is that the [supposed] royal palace at Meigle supported a thriving workshop of carvers. 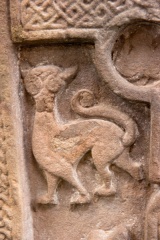 A strange beast,
perhaps a lion? 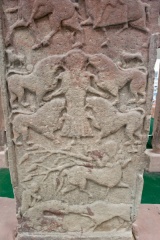 Daniel torn apart by lions,
on the Vanora Stone 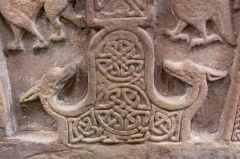 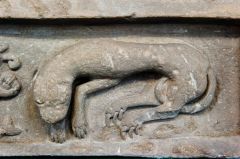 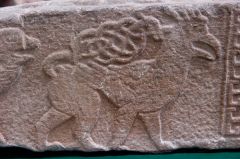