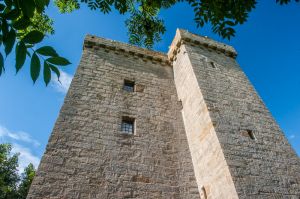 A beautifully built tower house dating to about 1500, although the style is that of an earlier age. Scotstarvit Tower is five storeys high, built to an L-plan, with a main block connected to a smaller wing. The main block measures 33ft x 27ft, and the wing 7ft x 13ft.

The tower was built by the Inglis family of Hill of Tarvit but sold to Sir John Scott in 1611. Sir John rebuilt most of the earlier building to create the tower we can see today. There is some confusion about the age of the Scotstarvit, perhaps created by the presence of a heraldic shield with a date of 1627.

The shield is almost certainly a later addition and perhaps refers to the remodelling of the tower by Sir John, best known as the author of 'Scot of Scotstarvit’s Staggering State of the Scots Statesmen'.

Scot eventually sold the tower to the Wemyss family, and it was abandoned in 1696. In 1948 Scotstarvit was purchased by the National Trust for Scotland. It is now cared for by Historic Scotland. 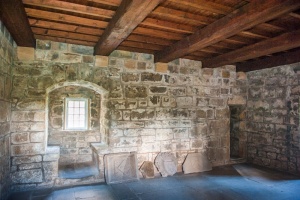 The tower is normally locked, however, you can get a key from Hill of Tarvit mansion house, about 1/2 mile away, across the A916 (subject to the mansion opening times). The tower is located on a narrow dirt track about 1/4 mile off the A916. Vehicles are not allowed up the track, but there is a wide layby for parking, and the walk is very easy, mostly level. Or you can park at Hill of Tarvit and stroll to the tower in 10-15 minutes.

The tower is surrounded by trees, but even so, you can get a reasonable glimpse from the roadside. Its worth the stroll even if the tower is closed, for the exterior is in very good repair and is actually quite impressive. There is a Historic Scotland information board outside the tower entrance explaining the history of the site and a few of the major architectural details.

Inside, you can explore 4 floors of rooms, one room to a floor. All the floors are linked by a single stair. The lower, vaulted chamber is unadorned, but the first-floor hall has a nicely carved fireplace and you can see corbels that would have supported flooring. There is also a small display of carved heraldic panels and gravestones found on site.

Unfortunately, the roof tends to be locked for safety reasons, which is a real shame as the views would be fantastic. Even so, you can get a very good idea of how people lived in the tower.

What struck me most was how thick the walls are. Obviously, Sir John Scott did not feel totally comfortable about the threat of attack and built to withstand a minor siege. Scotstarvit is a vivid reminder of how volatile life could be in earlier times, even - or especially - for a man as wealthy as Scott. 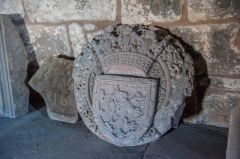 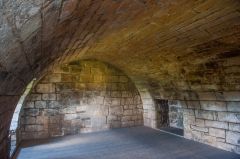 More self catering near Scotstarvit Tower >>