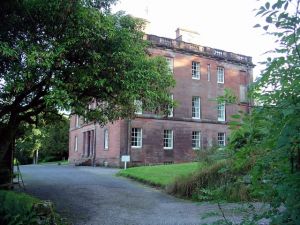 Rammerscales
Rammerscales is an attractive Georgian mansion built of pink stone around 1760 for a former physician to the Empress of Russia. The interiors feature Jacobite mementos, collections of sculpture, tapestries, and paintings, and a beautiful circular staircase.

We do not know exactly when this attractive 18th-century mansion was built, but on the basis of its neoclassical style, we can guess at a date around 1760. The origins of the estate, however, go back much further.

In the medieval period, Rammerscales formed part of the Lands of Holmains. King David II granted the estate to the Carruthers family in 1361, and descendants of the Carruthers held the estate for centuries. In 1745 Robert Carruthers made the mistake of supporting Bonnie Prince Charlie's bid for the throne. The Rammerscales estate appears to have been confiscated and was sold to Dr James Mounsey in 1758.

Mounsey was a fascinating character; though his family was from the nearby farm of Skipmyre, he spent several years in Russia, where he served as the physician and Privy Councillor to the Empress of Russia. When Czar Peter III Mounsey fled Russia for his native Scotland.

Mounsey must have made some determined enemies, for when it came time to design the house he insisted that every room must have more than one exit, so he would always have an escape route if his enemies closed in. Even today the house is striking for its large number of doors, though many have since been blocked or converted into bookcases. Rumours persist that Mounsey's ghost, called Old Jacobus, still haunts the library. When the house was used as a school during WWII the teachers and students became so frightened that they moved from the house to the stables.

The house is a very neat, symmetrical Georgian block, on a square plan with a loggia in Italianate style, decorated with Tuscan pillars. What makes the house so appealing is that it has been almost completely untouched since it was built. One alteration is the long gallery, built in the 1770s and converted into a library in the 19th century. The interiors are full of fine furniture and artwork, including sculpture by Rodin, Hepworth, and others.

The Annandale Way long distance path goes right past the front doors of Rammerscales, and there are miles of walks through the surrounding woodland.

The house is only open to the public for pre-booked tours.

More self catering near Rammerscales >>

More bed and breakfasts near Rammerscales >>