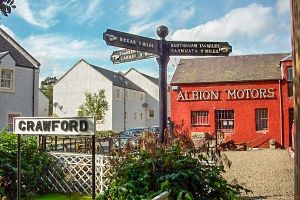 Gladstone Court Museum
Gladstone Court in an indoor street museum showing historic shops. Explore a reconstruction of a Victorian street scene, with authentic shops, and a 19th-century schoolroom. Aimed at children but appealing to kids of all ages, the museum gives a glimpse of what life was like in the Victorian period.
In addition to the schoolroom and shops, you can explore a library, see if you can withdraw money from the bank, visit a printer and a cobbler, see an old-fashioned telephone exchange and a photographer's studio, and see what life was like in 19th century Biggar. See if you can figure out what all those odd-smelling concoctions are in the chemist's shop, and see if you can spot any familiar brands in the grocers.

Gladstone Court was originally a private enterprise but was officially opened in 1968 by poet Hugh MacDiarmid, a resident of Biggar. Some of MacDiarmid's books are on the shelves in the library over the telephone exchange.

UPDATE
Gladstone Court has moved to a new site on Biggar High Street, to become part of a much larger Museum of Biggar and Upper Clydesdale, which opened in summer 2015. The new museum includes reconstructed shops and businesses from Biggar and the surrounding area, as well as an archive of historical documents.

Nearby accommodation is calculated 'as the crow flies' from Gladstone Court Museum. 'Nearest' may involve a long drive up and down glens or, if you are near the coast, may include a ferry ride! Please check the property map to make sure the location is right for you. 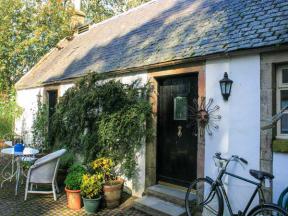