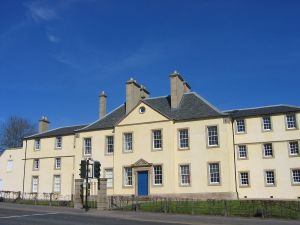 Low Parks Museum
This museum tracing the local history of South Lanarkshire is housed in a pair of historic buildings belonging to the Dukes of Portland. Exhibits cover local industries such as coal mining, weaving, and lace-making, plus the Cameronian regiment and the history of Hamilton Palace.
History
This is one case where the museum buildings are as interesting as the museum exhibits! The first of the buildings is known as Portland and was built in 1696 for David Crawford, lawyer and secretary to the 3rd Duchess of Hamilton. It is probably the oldest building in Hamilton. At the rear of the residence is a court for playing 'fives' (an early form of handball) and an assembly room.

The house once served as a coaching inn, and later as the estate offices for the Duke of Hamilton. The elegant assembly room boasts finely detailed plasterwork and a musician's gallery at one end and acts as the museum's focal point.

The second building is the Palace Riding School, designed by architect William Burn in 1837 for the 10th Duke of Hamilton. In 1983 the Riding School became the regimental museum for the Cameronians (the Scottish Rifles). The pair of buildings stand beside the site of Hamilton Palace, which was torn down in 1927.

Museum Highlights
The major focus at Low Parks is the Cameronians Museum. The regiment was formed in 1689 in honour of Richard Cameron, a Covenanting preacher who died at the Battle of Airds Moss in 1680. All the initial recruits were Covenanters, and the regiment is the only one in the British military with a religious origin. The regiment was disbanded in 1968, after 279 years.

Exhibits trace the history of the regiment and its soldiers, through flags, banners, medals, weapons and photographs. One of the prize exhibits is the 'Bluidy Banner' carried by the Covenanter army at the Battle of Bothwell Bridge in 1679 before the regiment was officially formed.

Another exhibit traces the history of Hamilton Palace, the main residence of the Hamilton family from 1591. The palace was the largest non-royal residence in Britain; a testament to the family's wealth and prestige. See prints and photos of the Palace before it was destroyed, as well as items salvaged from it, including a huge floor to ceiling gilded mirror.

Another exhibit details the remaining buildings from the ducal estate which can still be seen around Hamilton, including the Hamilton family mausoleum in the Palace grounds nearby. Did you know that the Hamilton Mausoleum used to hold the world record for the longest echo? Apparently, it took fully 15 seconds for the sound of a slamming door to die out, as the sound kept reverberating around the domed ceiling.

Local history displays look at coal mining in South Lanarkshire and tell the tragic story of the Blantyre Mining Disaster of 1877 when 207 miners lost their lives.

On a more positive note, you can see displays of early history, including a skeleton from a Bronze Age burial thought to be 4000 years old. See more exhibits on one of the most famous local residents; the Clydesdale horse, plus trace the heritage of local lace-making and weaving.

Nearby accommodation is calculated 'as the crow flies' from Low Parks Museum. 'Nearest' may involve a long drive up and down glens or, if you are near the coast, may include a ferry ride! Please check the property map to make sure the location is right for you.