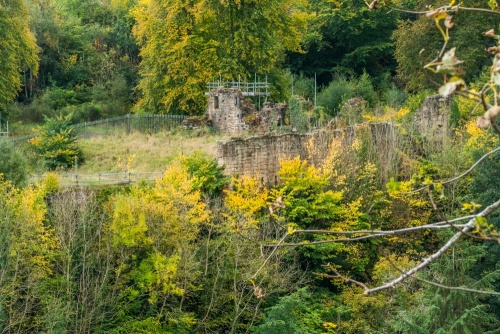 Cadzow Castle from Chatelherault's West Lodge
Cadzow Castle stands above Avon Water, overlooking Chatelherault Country Park, a remnant of a medieval hunting park. The castle dates to the 12th century, though it stands on a site probably used as a hunting lodge by the kings of Strathclyde centuries earlier. Cadzow was an occasional royal residence for kings going as far back as David I (1124 - 1153).

You may see different dates for the building of Cadzow Castle. The most common misconception is to term it a 16th-century castle, but this refers only to the rebuilding of Cadzow by Sir James Hamilton of Finnart for his half-brother the 2nd Earl of Arran.

The castle was besieged and sacked in 1572 by the Protestant Regents who were administering Scotland during the minority of James VI. Cadzow was destroyed by explosives to render it useless for military purposes and left to crumble into ruin until the 10th Duke of Hamilton began a rebuilding programme in 1820. 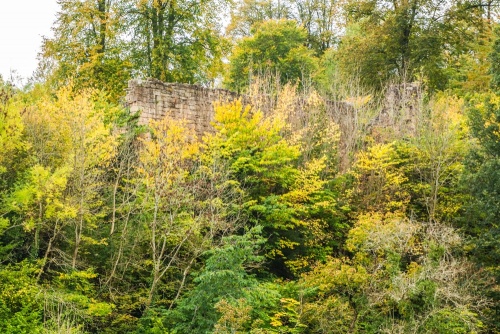 The castle ruins from Duke's Bridge

The Duke intended Cadzow to become a romantic folly in the grounds of nearby Hamilton Palace. The earlier ruins were landscaped to present a picturesque ruin in keeping with the romantic ideals of the time.

Today, the Great Hall, Kitchen, and Chapel remain from the medieval buildings at Cadzow. The site is defended by a pair of drum towers, one partially sunk in the ditch.

Cadzow Castle has suffered enormously from erosion and neglect over the past few years. Historic Environment Scotland (formerly Historic Scotland) who administer the site, have fenced it off behind high fences and the crumbling masonry walls are covered with scaffolding and almost overwhelmed by undergrowth.

Signs you can read through the fence say that the castle walls are dangerously unstable and the scaffolding is temporary and part of a necessary programme of work to stabilise the ruins. While that ambition is totally understandable, it does seem that the scaffolding has been untouched for years, while it rusts in place and is itself half-submerged beneath the encroaching foliage. 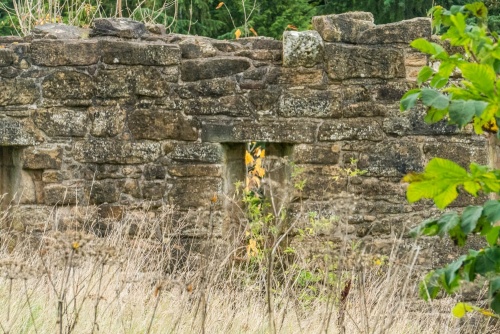 Cadzow today gives off a sad air of neglect. Hopefully, both funds and ambition can be found to repair the walls and once more give visitors access to the site.

You can get a good view of the castle from the terrace walk outside Chatelherault's West Lodge and visitor centre, and there is another good view from the Duke's Bridge, below the castle. A signposted footpath leads directly past the fenced area, and you can get a sense of how impressive the fortifications once were.

Nearby accommodation is calculated 'as the crow flies' from Cadzow Castle. 'Nearest' may involve a long drive up and down glens or, if you are near the coast, may include a ferry ride! Please check the property map to make sure the location is right for you.

More self catering near Cadzow Castle >>