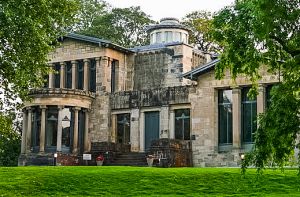 In 1857 a successful merchant named James Couper called in Alexander Thompson to design a comfortable villa just a few miles from the centre of Glasgow. The result was Holmwood, a unique essay in Greek design, with interiors richly decorated with classical themes.

Couper's family operated Millholm paper mill, just below the house, but the house was oriented not towards the mill but towards Cathcart Castle (now demolished).

Holmwood is considered Thompson's finest work, an ornate and eccentric example of beautifully decorated interiors based on the classical world, with marble, ornate plasterwork, and richly carved wooden decoration. One of the highlights is the dining room, with a frieze depicting the story of Homer's Iliad.

After the Coupar family sold Holmwood it passed through several owners before it was converted for use as a convent by the Sisters of Our Lady of the Missions order of nuns who later ran a school on the property. The nuns covered the original decorative scheme with plain paint.

When the Sisters left, Holmwood was scheduled for development, but the National Trust stepped in to save the property, and the Trust is now stripping away the modern paint and carefully restoring Holmwood to its 19th century best.

Many of the houses designed by Thompson have been altered over the years, but Holmwood is special because its interior has remained almost untouched. Thompson's design at Holmwood influenced major architects such as Frank Lloyd Wright and the proto-modernist school of architects. It was used as the inspiration for another Victorian-era mansion called Holmwood in Adelaide, Australia. The dome of Holmwood House has been used to illustrate a 20 pound note by the Clydesdale Bank.

The house is set in attractive grounds, with a riverside walk, and a kitchen garden planted with herbs, vegetables, and fruit known to have been used during the house's Victorian heyday.

Nearby accommodation is calculated 'as the crow flies' from Holmwood House. 'Nearest' may involve a long drive up and down glens or, if you are near the coast, may include a ferry ride! Please check the property map to make sure the location is right for you.

More self catering near Holmwood House >> 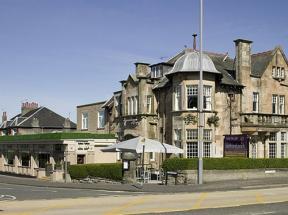 The Uplawmoor is a small independently run hotel. We pride ourselves on our friendly and personal service, renowned in the local area. more >>