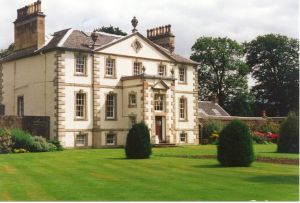 In 1763 a Glasgow merchant named Robert Allason purchased Flenders Farm, land the Allason family had worked for centuries. Allason made his fortune from the slave trade and tobacco plantations in the Caribbean. The money from his trading ventures enabled him to build a luxurious new house to replace the former farmhouse at Greenbank.

Allason did not have long to enjoy his wealth, for the American War of Independence put a damper on his trading success. The house was sold and passed through numerous hands over the following centuries.

In 1962 the Greenbank property was purchased by WP Blyth, who decided to transform the 18th-century vegetable and fruit gardens into an ornamental garden. The gardens, historic house, and the surrounding estate were given to the National Trust for Scotland in 1976.

Twelve Gardens in One

Apart from the walled garden, Greenbank has 16 acres of woodland, where rhododendrons flourish, as do a herd of Highland cattle.

The gardens are planted to provide colour in all seasons. Daffodils, aconites, bluebells, and snowdrops burst forth in early Spring. Winter-flowering shrubs like witch-hazel and Sarcococca add colour from December through February, and the gardens are planted with trees and shrubs such as dogwood, willow, and birch, whose winter bark adds even more interest to the gloomiest days of the year. Spring is the time for apple and cherry blossoms.

One interesting point for horticulturalists is that some of the daffodil varieties at Greenbank have never been identified and classified. Another highlight is the Narcissus, with over 447 named varieties to enjoy. The topiary is wonderful; children will enjoy a huge topiary rabbit!

Garden features include woodland walks through groves of tall beeches, and several ornamental pools and fountains. The gardens are particularly aimed at providing inspiration for urban gardeners. Greenbank holds the National Collection of Bergenias and hosts a trial area used by Gardening Which magazine to evaluate which plants are best suited to the Scottish climate.

Greenbank House itself is open to the public on certain days in summer, and offers an insight into the world of an 18th-century 'tobacco lord'. It is sobering to think that so much of the beauty we see today was built from wealth made in the slave trade.

The house is virtually unaltered since Allason built it, and provides a wonderful glimpse into the life of a wealthy Glasgow merchant at a time when Glasgow was the second-wealthiest city in Britain.

Nearby accommodation is calculated 'as the crow flies' from Greenbank Garden. 'Nearest' may involve a long drive up and down glens or, if you are near the coast, may include a ferry ride! Please check the property map to make sure the location is right for you.

More self catering near Greenbank Garden >>