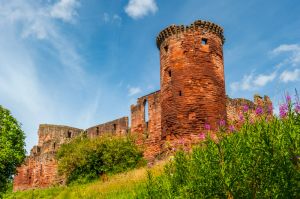 Bothwell is the largest and finest 13th-century stone castle in Scotland. Much of castle dates from 14th and 15th centuries, but part of the original circular keep survives.
History
In the mid-12th century David I of Scotland granted land here on a bend of the River Clyde to David Olifard. The last heiress of the Olifard line married Walter of Moray, ancestor of the Murray Clan, in 1242. Walter of Moray, or his son William (dubbed 'the Rich') began the first stone castle here.

Whichever of the Morays were responsible, the ambitious building project would have made Bothwell the largest and most impressive statement of wealth and power in Scotland, but the castle was never finished. It may be that the outbreak of the Wars of Independence in 1296 prevented the building from being finished.

By the late 13th century the centrepiece at Bothwell was complete; the great central keep, or donjon tower, along with a prison tower. Architectural historians have called the donjon the greatest secular example of medieval architecture in Scotland.

The Morays wanted to create a huge castle surrounded by a curtain wall, covering 1.5 acres, with a gatehouse defended by a pair of entrance towers. Other mural towers were planned for the wall. However, despite these ambitious plans, the only part of the castle ever completed was the donjon tower. This massive stone building stands over 30 metres high, and is 20 metres in diameter at the base.

The Siege of 1301
Finished or not, Bothwell was called into action during the Wars of Independence. Edward I took the castle in 1299, but the most dramatic event took place in 1301 when the English under Edward I returned and besieged Bothwell with over 6800 soldiers. Edward also had a huge siege engine called 'the belfry' transported from Glasgow. The belfry, or 'berefrey', was a mobile tower with ladders inside to allow soldiers to fight their way onto the curtain wall. Faced with the English weapons and manpower, the defenders of Bothwell held out for a month before they were forced to surrender. 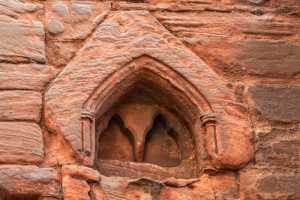 15th century piscina in the chapel
The castle stayed in English hands until the constable, Sir Walter FitzGilbert, surrendered it to the Scots after the Battle of Bannockburn. For this act FitzGilbert was awarded the barony of Cadzow. The Scots slighted the castle to make it unusable, but the English were back again in 1336. Edward III rebuilt Bothwell and made it his base of operations in Scotland. The following year Sir Andrew Murray ousted the English and slighted the castle again. He had the entire west side of the donjon pulled down so that it could not be used again by the English.

The Douglas Castle
In 1362 the Bothwell family heiress, Joanna Moray, married Archibald 'The Grim' Douglas. The couple had the donjon repaired and the curtain wall finished. Their son Archibald, 4th Earl Douglas, added a great hall, chapel, and tower house by 1424. The chapel and hall survive, but the tower house has been destroyed.

The Douglasses made too many enemies, however, and in 1445 their estates were seized by the crown. Bothwell was granted to a succession of royal favourites, then reclaimed as political allegiances shifted. Patrick Hepburn, 2nd Lord Hailes, gained Bothwell in 1488 and promptly gave it to Archibald Douglas, the 5th Earl, in exchange for Hermitage Castle. So Bothwell was back in Douglas hands once more.

The castle was abandoned by the 18th century and allowed to fall into ruin. Finally, in 1935 it was given to the state, and it is now in the care of Historic Scotland. Despite the destruction, the remains of Bothwell are one of the most impressive and imposing examples of medieval architecture in Scotland. 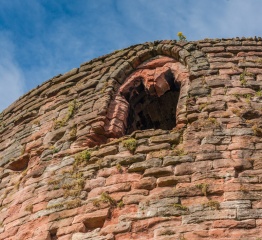 We found it rather difficult to find the castle. We used the official postcode in our satnav and ended up at the entrance to the Bothwell golf club on Bothwell Road (the B7071). As we eventually discovered, the castle is actually on Castle Avenue, off Bothwell Road at its junction with Main Street and Bellshill Road in Uddingston. It is signposted off Bothwell Road near the lights, where the road becomes Main Street. Curiously, the castle does not seem to be signposted off the nearby M74, which seems very odd, since that's the way most people would travel to reach Uddingston.

Once we'd actually found the castle it was down to the serious business of exploring the historic ruins. I say 'ruins' with some care, for though the castle is indeed largely a ruin, several parts of it still stand to full and very impressive height. The most impressive feature by far is the south east tower, a circular tower decorated with an elaborate corbelled parapet.

The much larger Donjon Tower erected by William Murray was unfortunately covered by scaffolding when we visited, due to concerns over falling masonry, so we weren't able to climb up the tower. We were, however, able to climb to the great hall, an impressive chamber with ornate arcading facing onto the inner castle courtyartd. The great hall features a very unusual 'coat-hanger' drawbridge, which gave access to the first floor chamber.

Beside the great hall is the 15th-century private chapel built by the Douglases. The chapel features a nicely carved piscina set into one wall, and the remains of a sacrament house set into another. Under the great hall is a vaulted storage chamber with an exhibition on the history of the castle and Edward I's siege of 1301. As part of the siege exhibition you can see a collection of large trebuchet balls used during the siege.

Bothwell Castle is a fascinating ruin, full of history, in a lovely parkland setting beside the River Clyde. Seeing the massive circular towers still standing to their full height, you begin to realise just how impressive the castle must have been in its heyday. 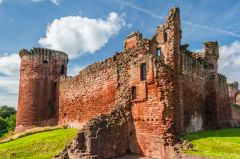 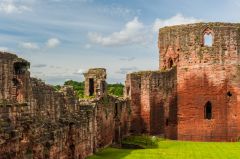 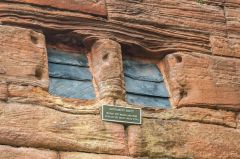 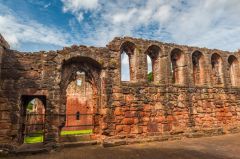 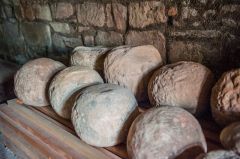 Nearby accommodation is calculated 'as the crow flies' from Bothwell Castle. 'Nearest' may involve a long drive up and down glens or, if you are near the coast, may include a ferry ride! Please check the property map to make sure the location is right for you.

More self catering near Bothwell Castle >>