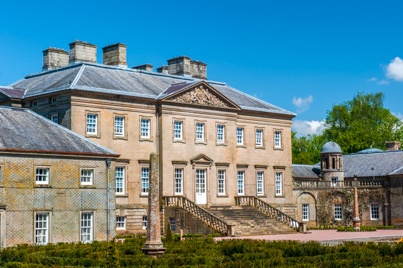 Dumfries House was a 'honey trap', built to attract a fertile new wife for a widowed Earl in need of an heir.

William Crichton Dalrymple, the 5th Earl of Dumfries, inherited family estates near Cumnock in 1742. Just over a decade later the Earl called in the Adam brothers Robert and John, to create a new house to replace the earlier mansion of Leifnorris.

The Earl's first wife died in 1756, and this sad event seems to have made him determined that his new house would attract a new wife, one who could give him an heir. To that end the Earl had his architects pull out all the stops; his new house was meant to impress and awe visitors, and it does that in some style. It was also finished on time, and on budget (modern builders take note).

The new house was furnished with the most fashionable furniture of the day, and in the mid-18th century that meant Thomas Chippendale. Earl William not only chose the finest pieces from Chippendale's catalogue, but he also had some pieces custom made for Dumfries House.

Was the 'honey trap' a success? Well, in 1762 the Earl married Anne Duff, but it seems the lady was a bit, shall we say, free with her favours, for a report only 4 months after the wedding tells of a certain Colonel Montgomery who was expelled from Dumfries House 'for being behind the curtain with the new Countess'.

It must not have been a happy marriage, for when the Earl died in 1768 there was still no heir. The house passed to a nephew, Patrick Macdougall, and his daughter married John, Lord Mount Stuart, thus sealing an alliance between the Crichtons and the Stuarts, two of the most powerful noble families in Scotland. Their son, the 2nd Marquess of Bute, chose to live at Mount Stuart, on Bute, so the house at Cumnock saw less and less use. 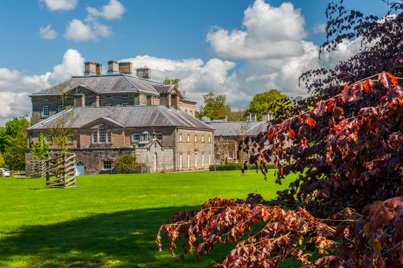 The house from the grounds

The house was extended in 1897 for the 3rd Marquess of Bute by architect Robert Weir Schultz, whose more modern extensions blend in so well with the 18th-century core of the house that you can't easily see where one starts and the other stops!

The house was requisitioned by the Army in 1942 and became a POW camp in the following year. In 2007 the house was on the verge of being sold at auction when HRH Prince Charles stepped in. The Prince helped create a rescue plan and secured funding to ensure that house contents would not be sold and the house and grounds could eventually be opened to visitors.

It is hard to pick out a single piece of furniture as the most impressive from all the fine art on view at Dumfries House, but if you must choose, then this exquisite example of work by Chippendale must take pride of place.

Despite the name, this beautiful bookcase is, in fact, made from padauk, not rosewood. Set in the Blue Drawing Room, the Bookcase could be used not simply as a showcase for books, but as a writing desk and a clothes press. According to Chippendale's famous 1745 'The Gentleman and Cabinet Maker’s Director', the bookcase sold for £47.5s.

This extraordinary room is panelled in cedar wood and was purpose-built to show off a set of four Gobelin tapestries given to the 2nd Earl of Stair by Louis XIV of France after his service as British Ambassador to France. The tapestries show scenes from Roman myths.

Designed by Thomas Chippendale expressly for the 5th Earl of Dumfries. The bed was delivered a full three years before the design was included in Chippendale's catalogue. The bed is beautifully carved with images of fertility (the Earl was in need of both a wife and an heir!) and was originally hung with silk and damask. 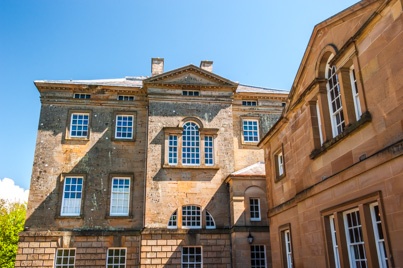 You can only view the house by a timed tour, led by a guide. This is no bad thing, for our guide was extremely knowledgeable and very entertaining.

Oh, how I wish indoor photography was allowed at Dumfries House! I am sure there are good reasons why I wasn't allowed to take photos inside the house, but I can tell you it was hard not to! The interiors are simply stunning, among the finest in Scotland, and it seems such a shame that I can't share the experience of visiting with you more thoroughly. You'll simply have to see the house for yourself!

Dumfries House is a time capsule, the original Georgian rooms seem to have remained untouched for 250 years. There seems to be no concession to modernity, and that's no bad thing!

The gardens are lovely and there are very attractive walks through woodlands near the house, where bluebells linger on the shade of the trees in Spring. Since our visit, more of the gardens have been restored and opened to the public. A four-acre walled garden is reached via a winding path through the arboretum. There is also now not only an adventure play area for children but an engineering play area! 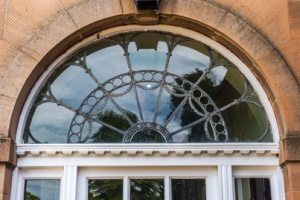 A simple architrave over the visitor entrance 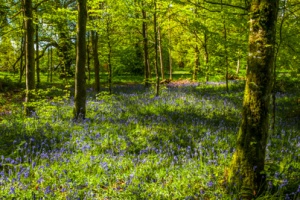 Bluebell woods in the grounds 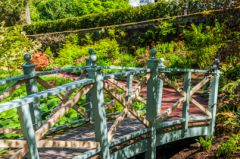 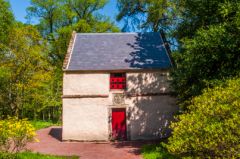 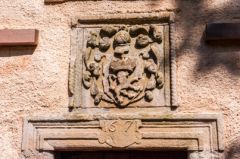 Nearby accommodation is calculated 'as the crow flies' from Dumfries House. 'Nearest' may involve a long drive up and down glens or, if you are near the coast, may include a ferry ride! Please check the property map to make sure the location is right for you.

More self catering near Dumfries House