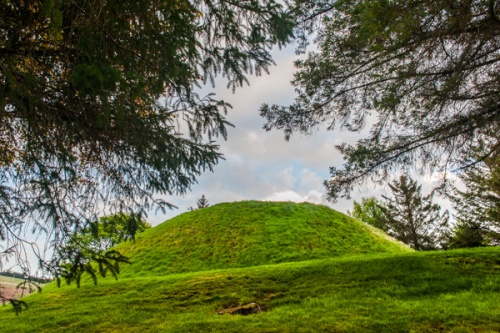 Probably one of the least celebrated historic sites in Ayrshire, the Norman mote, or castle mound in the historic town of Dalmellington deserves a bit more recognition.

Not much is known about the castle history. It seems very likely that the site was used as early as Neolithic times - indeed the name Dalmellington translates loosely from the Gaelic as 'meeting place at the mound with a Motte'.

The mote we see today was probably built around 1200, under the lordship of Thomas Colville Le Scott, and it would have served as a seat of local government; a place to administer justice and impose authority over Scott's domains.

The mote describes an almost perfect cone, some 60 feet around at the base and rising up to a broad trench, or terrace and then to a wide, flat top about 60 feet above ground level. The terrace is broadest to the north, and joins to a sloping rampart to the west. A timber palisade would originally have stood atop the summit, protecting a wooden tower.

At the base of the mote was a large open area, or bailey, where secondary buildings for animals, storage, and the lord's retainers would have stood, enclosed within a similar outer fence. You can still see traces of the outlying bailey ditch, but all traces of building work are long gone. The mote is extremely well preserved and that is the most interesting feature of the site.

I'm nuts about history, but I had no idea the Dalmellington Mote existed. I actually came to the town to visit the museum, which as luck would have it, was closed. Wondering what on earth to do with myself, I discovered a town information sign and map on the market place, and to my surprise found a description of a Norman castle motte just a few hundred yards from the square. Serendipity, I suppose, but my goodness, I do wish the mote was more highly publicised because it is actually quite impressive!

You really do get a good idea of how a traditional 12th-century castle mound looked, how the motte was formed, and how the system of earthworks defended the site. The information panel at the base of the mote is actually quite good, with an artist's impression of the site and an overview of its development.

I climbed to the top of the mote and generally poked about for 10 minutes. And that's all it will really take, as there is no vestige of stonework to see, just the shape of the earthen mound to give you an idea of how it might have looked during the medieval period. 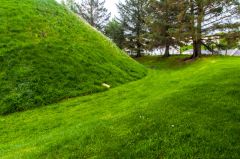 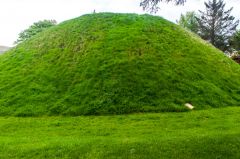 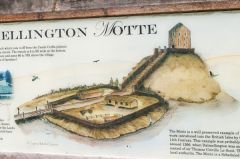 Nearby accommodation is calculated 'as the crow flies' from Dalmellington Mote. 'Nearest' may involve a long drive up and down glens or, if you are near the coast, may include a ferry ride! Please check the property map to make sure the location is right for you.

More self catering near Dalmellington Mote