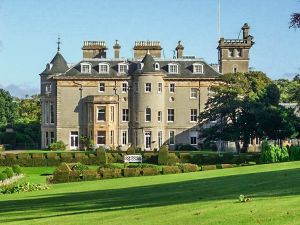 Finlaystone House & Garden
Finlaystone is an 18th-century mansion with a rich history dating back to the 13th century. It has been the seat of both the Cuningham and MacMillan clans, welcomed notables from John Knox to Robert Burns. The house stands in a superb garden.

There has been a castle at Finlaystone since the late 14th century when Robert II confirmed a grant of the estate to Sir John de Danyelstoun. Sir John's son, Robert, served as the keeper of Dumbarton Castle, but when Sir Robert died in 1399 his estates were divided between his 2 daughters. Finlaystone passed to Margaret, who married Sir William Cunningham in 1405, and Finlaystone was held by the Cunningham family for over 450 years and the house served as the clan seat.

The Cunninghams were supporters of the Scottish Reformation and hosted the first Protestant Reformed communion service, led by John Knox in 1556. The service was held outdoors, under a yew tree which can still be seen in the grounds. Curiously, the tree is not in its original position; it was replanted in 1900. A later Cunningham, William, the 9th Earl, befriended poet Robert Burns. Burns dined at Finlaystone and scratched his name on a window pane. He wrote a lament for the Earl when he died in 1791, and named his son after him.

In 1710 the house at Finlaystone was described as 'a noble and great building', but that house is long gone, for in 1746 architect John Douglas was called in to design a new house for the Cunninghams, though it was not actually built until 1764. The new Georgian house incorporated the 15th-century castle.

A later Cunningham was William Cunninghame Graham, more commonly known as 'the swindler', for he was prompted by his stepson to forge bank notes. 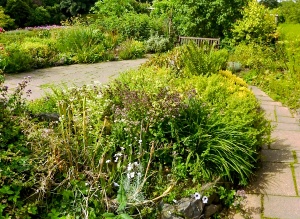 The 'Smelly Garden' (c) Lairich Rig
The current house was the result of a remodelling in Scottish Baronial fashion carried out in 1903 for George Jardine Kidston, the chair of the Clyde Shipping Co. The new house kept the original 18th-century facade. The ornate interiors feature marble pillars and chimney pieces and richly decorated plasterwork ceilings. There is a Clan MacMillan centre housed in the stable block, and you can access the clan archives by appointment.

Finlaystone House stands in 500 acres of grounds, including large tracts of ancient woodland and mature gardens. There are 140 acres of woodland, estimated to be 300-400 years old. The 10 acres of formal gardens were laid out in 1900, and feature a 'smelly garden' designed for its scent.

There is a gently curving herbaceous border, knot garden, bog garden, and a fascinating area of Celtic paving stones creating intricate patterns on the lawns. The gardens feature snowdrops in the woodlands in early spring, and lush displays of azaleas and rhododendrons in summer. Other highlights include luxurious peonies, hydrangeas, and Oriental poppies.

There are wide, sweeping lawns and carefully sculpted hedges, plus a peaceful walled garden. There is also a large heronry and an area of mudflats designated as a Site of Special Scientific Interest (SSSI).

The gardens and estate are open daily throughout the year, and there is a small entrance charge. The house is used for weddings and corporate events, and is not open to visitors.

Nearby accommodation is calculated 'as the crow flies' from Finlaystone House & Garden. 'Nearest' may involve a long drive up and down glens or, if you are near the coast, may include a ferry ride! Please check the property map to make sure the location is right for you.