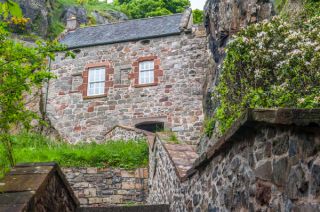 Known as 'The Rock of the Clyde', this dramatically situated castle has a history going back over 1500 years. The fortress is set on and around a pair of volcanic peaks rising from the River Clyde at its confluence with the River Leven. Dumbarton Castle has the longest recorded history as a fortified site of any place in Scotland.
History
From the 5th century to 1018 it stood at the centre of the Kingdom of Strathclyde, controlling south west Scotland. The Venerable Bede, writing in AD 731, described a fortified British city of 'Alt Clut', set on a rock in the Clyde. A few decades later the castle was attacked by a combined force of Picts and Northumbrians, and a record in 780 tells of the 'burning of Clyde Rock', as the Kingdom came under increasing pressure.

Archaeologists have discovered remains of an earthen rampart with timber fortifications enclosing the steep hillsides of Dumbarton Rock, and remnants of Romano-British pottery. You can see almost no evidence of the Dark Ages fortifications, which were almost certainly destroyed by fire, possibly in a Viking attack in AD 870. The attack was led by Olaf the White, a Norse chief from Dublin, whose men besieged Dumbarton for 4 months and took a great haul of treasure and slaves when the castle finally capitulated. 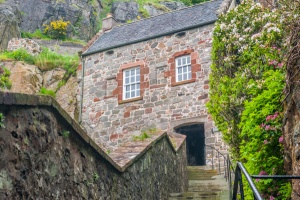 The 16th century Guard House
Strathclyde slowly regained its strength, and by the 10th century, it was the stronghold of the new kingdom of Scotland. The first king of Strathclyde to become ruler of Scotland was Duncan I, who succeeded his grandfather, Malcolm II in 1034.

From this 'pre-Scottish' period the only real remains we can see are a pair of intricately carved 10th-century cross slabs, found in the terraced garden area beside the Governor's House. These can be seen in the exhibition area near the castle entrance.

The Medieval Castle
The next mention of Dumbarton Castle in the historical records comes from 1222 when Alexander II mentions a 'new castle' here. From the outset the medieval castle of Dumbarton was a royal fortress, with a keeper, or constable, controlling the castle on the king's behalf. The first recorded constable was William Bisset, in 1237.

Edward I of England captured Dumbarton in 1296 during his first invasion of Scotland. The English garrison withdrew after the Scottish victory at the Battle of Stirling in 1307. Three knights captured during the battle were imprisoned at Dumbarton by William Wallace. Wallace himself was captured in 1305 by the constable of Dumbarton Castle and was probably imprisoned here briefly. The Wallace Tower is named for him, and tradition suggests that he was held in the Guard House. 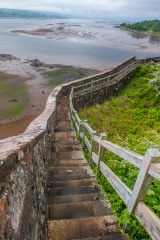 Parapet walk to the
Spanish Battery
After Scottish defeat at Halidon Hill in 1333, David II took refuge in Dumbarton Castle with his consort, Queen Joan. Indeed, Dumbarton was one of only 5 castles to stay loyal to the Scottish king's cause. David stayed at Dumbarton until a ship was able to carry him to safety in France.

The later medieval history of Dumbarton seems to consist of near-continuous sieges and squabbles. In 1489 James IV besieged it twice, and only subdued the garrison with the aid of Mons Meg, the largest cannon of its day. James later used Dumbarton as his headquarters to launch attacks on the Lords of Isles.

In 1514 the Earl of Lennox captured the castle by getting his men to tunnel under the North Entry, but he was only able to hold it for a year before his garrison was overcome by the Duke of Albany. Albany installed a French garrison and used Dumbarton as his base to travel back and forth to France.

Mary, Queen of Scots
In 1548 the young Mary, Queen of Scots, aged just five, was brought to Dumbarton by her mother, Queen Marie for her safety after the English victory at Pinkie. The young queen stayed here for 6 months and almost died from smallpox contracted during her stay. She came to Dumbarton as an adult, as part of a royal progress in 1563. We even know what was on the menu when she dined at the castle on 15 July (salmon and white wine). After Mary's flight to England the castle was held for 3 years by her supporters, known as 'the Queen's Party'. The castle was only taken after a daring raid, the attackers scaling the almost sheer north-east cliffs, where they correctly guessed the defenders would not think to keep watch. 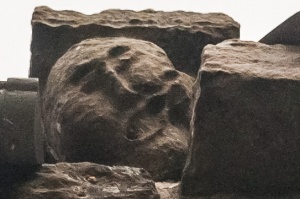 'Fause Menteith' carved head
After Mary's reign, Dumbarton Castle lost its pre-eminent role as the 'Gateway to Scotland', and became a garrison fortress; a military fort rather than a royal castle. Oliver Cromwell seized Dumbarton in 1652 without a shot fired against him, but the biggest change came in the wake of the failed 1715 Jacobite Rising when the English Major-General George Wade had the castle rebuilt as a Georgian military fort. Wade built several gun batteries positioned at strategic points around the rock, and it is these batteries that are the major structures we can see at the castle today.

After that, the castle served more as a state prison than a significant fortress. Patrick Stewart, the notorious 2nd Earl of Orkney, was imprisoned here, as were prominent Jacobite supporters. In the Napoleonic Wars, the castle was the prison for General Edouard Simon, captured at Busaco. The general was allowed to climb to the top of The Beak twice daily, always accompanied by 2 guards.

Even before General Simon's imprisonment, Dumbarton was a tourist attraction. Dr Johnson came here with Boswell on his celebrated tour of Scotland in 1773. Perhaps the most famous tourist was Queen Victoria, who visited in 1847, sailing up to a specially built pier on her royal yacht. The castle ceased to have any military function by the turn of the 20th century, but an anti-aircraft battery was set up during WWII, and in 1941 the castle was bombed, the first attack on Dumbarton in almost 3 centuries. 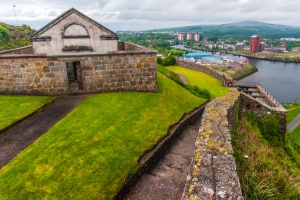 The Powder Magazine
King George's Battery
Built in 1735 as part of the river-facing defences. Named for King George II.

Governor's House
Also built in 1735 to provide an impressive residence for the governor. The first governor to live here was John Kennedy, 8th Earl of Cassilis (see Culzean Castle).

Guard House
This 16th-century building spans a rocky cleft and secures access to batteries higher up on the Rock. A carved head on the eaves facing downhill is said to be a caricature of 'fause Menteith', the Earl of Menteith who captured William Wallace in 1305 and handed him over to the English. It is not a flattering carving!

Portcullis Arch
This 14th-century arch is the oldest structure at Dumbarton Castle It was used to control access from the south to the summit of the Rock. Portcullis slots can be seen on both sides of the archway.

White Tower Crag
The highest point on the Rock, at 240 feet above sea level. During the medieval period, the summit was topped by the White Tower. 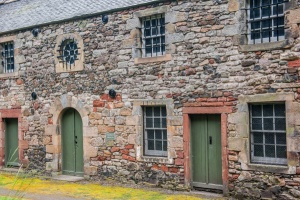 The French Prison
The French Prison
Built around 1790 and used to hold prisoners seized during the Napoleonic Wars. Near the prison a set of steps go down into the rock to access a well. This was probably the original well for the Dark Ages fortress.

Wallace Tower
Built in the early 15th century, this originally stood 4 storeys high and may have been used as a royal residence when Dumbarton Castle was owned directly by the crown. The tower was destroyed sometime before 1800.

18th-century Batteries
A set of 3 gun emplacements built in 1795, named after the Duke of York, Duke of Argyll, and Prince of Wales.

Powder Magazine
Built in 1748, this odd structure looks more like a mausoleum than a building for holding barrels of gunpowder. Over 150 barrels could fit inside the magazine, located atop the Beak.

These are just a few of the highlights. There is so much to see at Dumbarton that you will easily find yourself taking several hours to explore everything, and if you come on a clear day you will be rewarded with fabulous views along the Clyde. 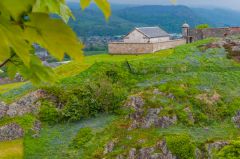 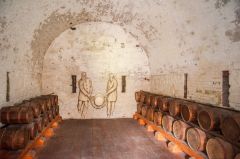 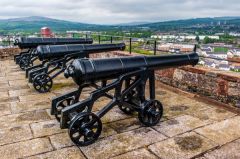 Nearby accommodation is calculated 'as the crow flies' from Dumbarton Castle. 'Nearest' may involve a long drive up and down glens or, if you are near the coast, may include a ferry ride! Please check the property map to make sure the location is right for you.

More self catering near Dumbarton Castle >>