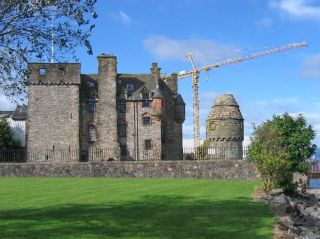 Newark Castle, Glasgow
An impressive tower built about 1478 by Sir George Maxwell, on lands acquired by the Maxwell family through an advantageous marriage in 1402. Sir George's contributions at Newark include a tall tower house in the north east corner of the site and the western gatehouse. James IV stayed at Newark in 1495 on his way to the Hebrides. The castle was later extended and strengthened by Sir Patrick Maxwell, who became laird in the 1580s.
Patrick Maxwell's 'new wark', or new building work, gave the site its current name. He seems to have destroyed the earlier great hall and replaced it with a larger residence block on the north side of the courtyard. He rebuilt the courtyard wall and incorporated the tower into his defences. The 'new wark' was executed in magnificent Scottish Renaissance style, using red sandstone to create one of the finest examples of secular architecture from the late 16th century anywhere in Britain.

As glorious as Sir Patrick Maxwell's architectural achievements, he was a thoroughly unpleasant character, even by the rather dubious standards of the 16th century. He murdered two neighbouring members of the Skelmorlie family and members of his own family. He behaved so badly towards Lady Margaret Crawford, his wife, that in 1595 Sir Patrick's own mother was moved to complain to the Privy Council.

Lady Margaret alleged that he had attacked her with a sword and kept her locked in her room for 6 months, where she had been forced to live on only bread and water. After 16 children and 44 years of marriage Lady Margaret finally escaped and fled to Dumbarton, where she died. Sir Patrick was never called to account for his actions.

Newark Castle has some wonderful touches that help the past come alive. You can see how the servants lived and worked in a great house of the period, and see an original bedchamber, complete with its historic fittings and fixtures, including a folding closet-bed and a painted ceiling.

NB. Do not confuse this Newark Castle with the 12th-century fortress of the same name in Newark-on-Trent, England.

Nearby accommodation is calculated 'as the crow flies' from Newark Castle, Glasgow. 'Nearest' may involve a long drive up and down glens or, if you are near the coast, may include a ferry ride! Please check the property map to make sure the location is right for you.