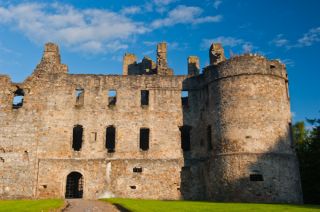 Balvenie Castle stands on a small, wooded hill on the northern outskirts of Dufftown. The castle is rather overshadowed by its more famous and much more modern neighbour, the Glenfiddich distillery, one of Scotland's most well-known whiskey brands. Yet though visitors flock to visit the distillery, many ignore the presence of this historic castle stronghold, fringed by trees. And that's a shame, for Balvenie is an impressive historic monument, home to three of Scotland's most important families over the centuries.
The first of these families were the 'Black' Comyns, Earls of Buchan, who built the castle in the late 13th century. The second Comyn Earl of Buchan, Alexander (1233-1289) acquired Balvenie in the 1260s. Alexander was the son of Scotland's first Anglo-Norman earl and the founder of the 'Black' branch of the Comyn family. Alexander's half-brother was Walter, founder of the 'Red' Comyn line.

Unfortunately for the Comyns, Walter's son, John Comyn, was a bitter rival of Robert Bruce. In 1306 Bruce murdered John Comyn in one of the pivotal acts of the Scottish Wars of Independence. The Comyn family then threw their allegiance firmly behind Edward I of England, against Bruce and his allies. It was a fatal move for the fortunes of subsequent generations of Comyns, for Robert Bruce outlawed the Comyns. Less than 50 years after Balvenie was built, the Comyns were gone. 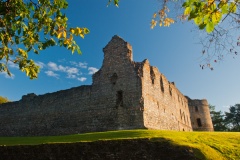 South west corner and earthworks
Remnants of the Comyns' work include the massive stone wall which still encloses the site and the ditch beside it, plus a short section of a wall walk on the south side, where defenders would have stood and watched for approaching enemies.

We do not know who received Balvenie from Robert Bruce, for the castle disappears from the historical records for a century. What we do know is that sometime in the 14th century the castle fell into the hands of the powerful 'Black' Douglas family. Evidence of their ownership is scanty, though it seems likely they rebuilt the accommodation along the west, south, and east ranges. 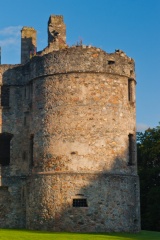 The Atholl Lodging
The Douglas family fell from power with a dramatic thud; a conflict with James II ended in 1455 when all the Douglas estates were seized by the crown. James II granted Balvenie to John Stewart, later the Earl of Atholl. Stewart was married to Margaret, the Fair Maid of Galloway, who had been married to both the 8th and 9th Earls of Douglas. The Stewarts owned the castle for the next 250 years, paying a nominal rent of a single red rose (this went up to two roses after a century, proving that even in the late medieval period, inflation was active!).

Much of the castle as we see it today is the result of Stewart rebuilding of the earlier medieval structure. The most obvious and impressive Stewart feature is the round tower beside the main entrance. This is the Atholl Lodging, probably built by the 4th Earl and his first wife, Lady Elizabeth Gordon. Mary, Queen of Scots stayed in one of the second floor chambers of the Atholl Lodging in 1562 when she visited Balvenie as part of her campaign against the Earl of Huntly.

In 1595 the 5th Earl of Atholl died without an heir, and the castle reverted to the crown. It passed through a number of hands, and was used as a military base by the Marquis of Montrose, followed by Royalist troops, Jacobite troops, and even troops loyal to William and Mary of England. In 1718 the lord of Balvenie, William Braco, committed suicide, and the castle was no longer used as a residence. Finally, in 1929 Balvenie was taken into state care, and it is now looked after by Historic Scotland.

By far the most impressive feature of the castle are the Atholl Lodgings, with chambers on three floors, reached by a spiral stair. Within the courtyard are a number of ancillary chambers, and several storage cellars. Perhaps the most interesting feature, however, is the double yett, or wrought iron gate, which defends the main entrance. The yett is set behind not one but two outer wooden doors to provide an extra level of security. In this case the yett is made of two hinged doors joined at the centre and hinged at the side, a design that is unique in Scotland. This style of defensive entrance gate replaced the more unwieldy portcullis in the late medieval period. 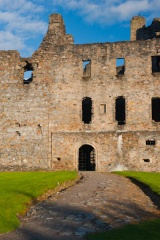 Path to the main entrance 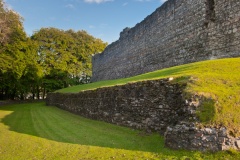 Retaining wall to the castle rear 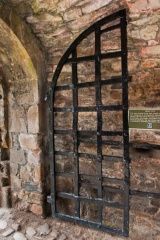 The yett, or iron gate 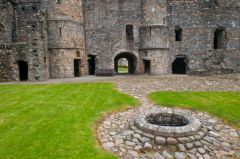 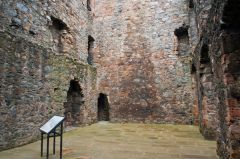 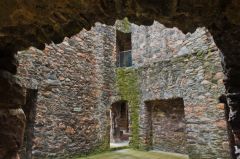 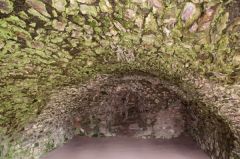 More self catering near Balvenie Castle >> 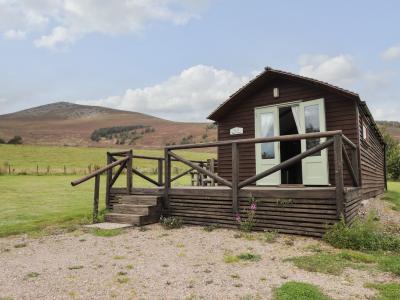 Ben View in Corrieour near Dufftown in Moray sleeps two in one bedroom.
Sleeps 2 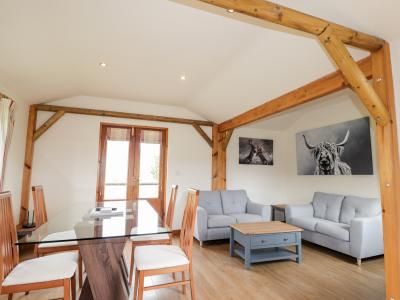