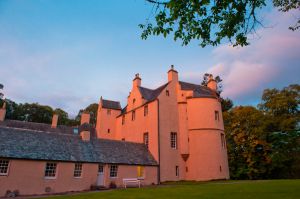 Beldorney Castle is a restored 16th or early 17th-century tower house beside the River Deveron, in the north-west corner of Aberdeenshire. The Z-shaped house was built by the Ogilvey family and was later owned by a succession of families, among them the Gordons, Lyons, Buchan, and Grant families.

The castle was probably built by George Gordon, the first Laird of Beldorney. Successive generations of Gordons lost bits and pieces of the estate until John Gordon, the 10th Laird, answered the call of Bonnie Prince Charlie in the 1745 rebellion and was forced to go into hiding. It seems quite likely that Gordon spent at least some of his 15 years on the run hiding in a secret chamber within Beldorney Castle.

The castle was renovated in the 20th century by the Robinson family and is still in private hands. Unfortunately, as it is privately owned, the castle is only occasionally open to the public for visits. Group visits have been arranged in the past.

Even better, there is currently a self-catering cottage beside the castle, so if you can book a stay at a historic Scottish castle.

About seven miles away is Huntly Castle, while Balvenie Castle is an equal distance away.

I had the opportunity to spend a week as a [paying] guest at Beldorney, in the modern wing attached to the historic tower house. The owners were hospitality personified, and kindly showed me around the castle, allowing me to poke my nose into medieval crannies and nooks, see the 'bones' of the building, and get a glimpse of medieval wall paintings. It's a fabulous historic house, and I thoroughly enjoyed my stay - and the area is blessed with incredible scenery.

UPDATE
In 2012, after my visit, the castle was sold, for just the 3rd time in 221 years. As far as I can determine the castle no longer welcomes paying guests, which is a shame, for it was a real treat to visit. 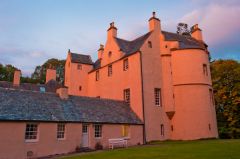 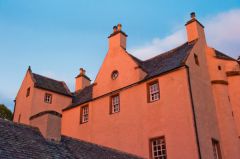 More self catering near Beldorney Castle >>