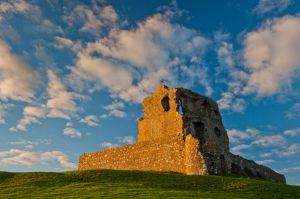 Auchindoun Castle
Auchindoun Castle is a 15th-century stone fortress built within the encircling earthworks of an Iron Age hillfort beside the River Fiddich. The castle was erected by John, Earl of Mar, but the earl did not have long to enjoy his new castle before he was murdered by his own brother, James III of Scotland.

The setting for Auchindoun Castle is superb, set high on a hill overlooking the Fidditch valley. In sunshine, the castle looks like a perfect medieval fortress, but in the gloom, it is a place to send shivers down your spine. That's no surprise, for Auchindour has a long and grim history, and is associated with some of the bloodiest events in Scottish clan warfare. 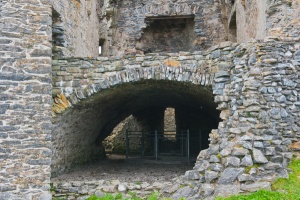 In 1479 James III granted the Earldom of Mar to his favourite architect Thomas Cochrane, who probably built the stone fortress at Auchindoun. In 1509 Sir James Ogilvy of Deskford granted Auchindoun to his nephew, Alexander Ogilvy, and in 1567 the castle was sold to Sir Adam Gordon.

In 1571 Sir Adam began one of the most unpalatable episodes in the bloody history of the Scottish clans. Gordon was at odds with a nearby noble, Forbes of Towie. In November of that year, he rode to Corgarff Castle, hoping to capture his enemy, though he claimed he was acting in the name of Queen Mary against the Forbes, who were known to support the claims of the infant James VI. 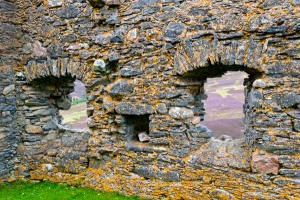 Windows in the outer wall

The Herod of the North

Forbes was not at home, and his wife, Margaret Forbes, refused to allow Gordon and his men to enter (another version of the story says that Gordon knew full well that his enemy was absent, and timed his attack with that fact in mind).

Gordon became enraged when Margaret Forbes shot one of his men in the knee with a pistol. In a fit of anger, he ordered his men to set fire to the house. All 27 people inside Corgarff were burned alive, including several children. This act of cruelty earned Gordon the moniker, 'Herod of the North'.

The story does not end there. William MacIntosh burned Auchindoun in retaliation for Gordon's cruelty. MacIntosh regretted his deed, and in 1592 he rode to Adam Gordon's castle at Gight to attempt to make amends. Gordon was away from home, and his wife Henrietta told MacIntosh that her husband would no doubt behead him, but she, being more tender-hearted, would spare him.

MacIntosh, in an act intended to emphasize his regret and willingness to atone for his deeds, lay his head on a block used to butcher bullocks. Henrietta Gordon could not resist the temptation and had her cook behead MacIntosh on the spot. 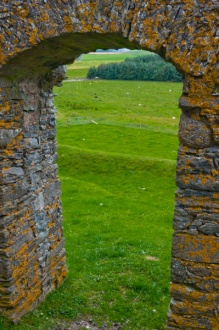 Earthworks through an
outer doorway arch

The two acts; the burning of Corgarff, and the beheading of MacIntosh, were tuned into popular ballads, 'Edom O'Gordon' and 'Turn, Willie MacIntosh'.

In 1594 Auchindoun was sold back to the Gordon family, but in 1660 Charles II granted it to the Marquis of Huntly. The days of Auchindoun were ending, however, and the castle was allowed to fall into disrepair. Finally, in 1724 William Duff of Braco took stones from the castle to build his new house at Balvenie.

Access to Auchindoun is not straightforward. When we visited, the access road was washed out, and in any case, it was little more than a dirt track. It looks like Historic Scotland is in the process of sorting out better access and parking area closer to the castle itself, but in the meantime, you have to park in a layby on the main road and walk uphill, then along a muddy farm track to the castle site, a walk of about 10 minutes.

Be aware that the track is muddy, and you will need good footwear. There are no facilities at the castle, but if you do take the time to climb to the castle you will be rewarded by a marvellous atmosphere and fabulous views over the surrounding countryside.

I visited twice; once to get a feel for the castle, the next time because I was so captivated by the atmosphere that I wanted to photograph the sun rising over the ruins. Though I had to get up at 5am, it was time well spent; I got to watch the castle come to life in the early morning light. It was an unforgettable sight, and the atmosphere was marvellous; a combination of scenic splendour and eerie decay. If Auchindoun was easier to get to it would be a magnet for visitors.

The Historic Scotland website now lists this site as 'View exterior only'. I can only assume there are structural problems, which will hopefully be rectified so more people can enjoy the site. I would still recommend a visit just for the amazing setting and atmosphere - not to mention the tumultuous history! 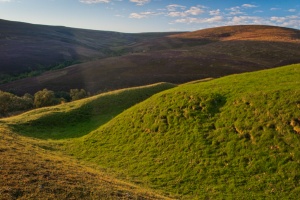 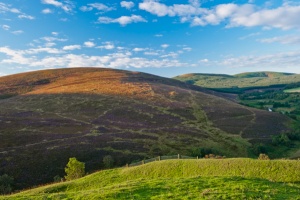 Looking east from the castle 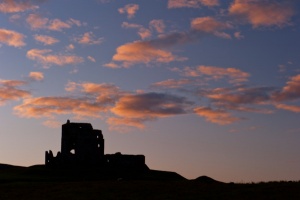 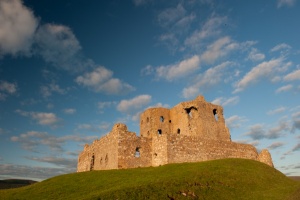 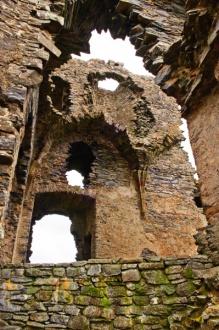 Inside the tower ruins 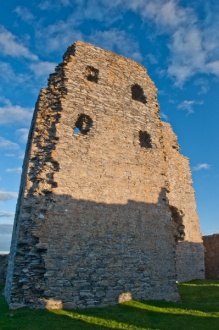 The tower at dawn 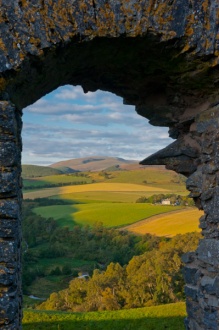 The Fidditch Valley
through a window arch

About Auchindoun Castle
Address: A941, Dufftown, Moray, Scotland
Attraction Type: Castle
Location: Two miles South of Dufftown on the A941. Access on foot only, signposted from the A941. There is a small layby on the east side of the road (heading south). Follow the rough farm track uphill, branch right towards Parkhead Farm, and you will see the castle ahead. Good footwear is necessary!
Website: Auchindoun Castle
Historic Scotland
Location map
OS: NJ349374
Photo Credit: David Ross and Britain Express

More self catering near Auchindoun Castle >>