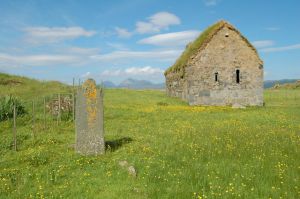 Eilean Mor: St Cormac's Chapel
On a small island off Kilmory, on the west coast of the Knapdale peninsula, stands a small chapel associated with St Cormac. One end of the chapel stands roofless to the sky, but the east end still protects a vaulted chancel with an effigy of an ancient churchman. The figure is thought to date to the 12th century.

Also within the chancel is the shaft of an early medieval cross, which is said to stand at the west end of the grave of St Cormac (Carmaig, or Abban moccu Cormaic). This is described by the Royal Commission on the Ancient and Historical Monuments of Scotland as a 'slab-like ringed cross'. It stands 1.75 metres high but originally stretched to about 2.8 metres. Carved on one face are a pair of beak-head monsters, a rider, and a large monster holding a serpent.

The chapel is a small rectangular structure some 38 x 20 feet. After 1600 it was used as an inn, which accounts for the fireplaces at the west end. The building encloses an earlier structure about 13 x 10 feet which now forms the chancel.

To the south of the chapel are two standing crosses (one is a replica) and close by is a cave once used as an anchorite cell. On the walls of the cave are carved two 8th-century crosses, while close to the mouth of the cave is a second, small chapel.

Eilean Mor is part of the McCormaig group of islands that lie at the mouth of Loch Sween, in the Sound of Jura.

Nearby accommodation is calculated 'as the crow flies' from Eilean Mor: St Cormac's Chapel. 'Nearest' may involve a long drive up and down glens or, if you are near the coast, may include a ferry ride! Please check the property map to make sure the location is right for you.