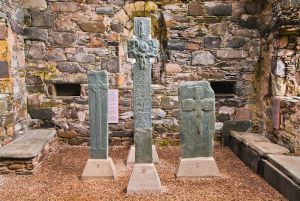 Near the southern tip of the Knapdale peninsula stands an isolated 12th-century chapel of a type once common throughout the West Highlands. Within the chapel is a remarkable collection of 12th and 13th-century grave slabs gathered from the churchyard and brought inside to protect them from the elements.

One stone appears to have been produced at Saddell Abbey, in Kintyre, and imported to Keills. In addition to the grave slabs are other examples of early medieval sculpture, and the wonderful early Christian cross known as the Keills Cross.

The Keills Cross (sometimes called the High Cross of Keills) probably dates to the late 7th century (though some estimates place it in the late 8th or early 9th century). It stands just over seven feet tall, just under two feet across the arms, and is six inches thick.

The cross head has a prominent central boss, in common with other early Christian crosses in the West Highlands. The face is intricately carved with leaf scrolls and interlaced panels. The style is Irish, an indication of the profound influence that Irish Celtic art had throughout the west of Scotland. 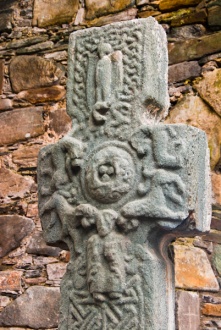 The High Cross of Keills

The Keills Cross originally stood behind the chapel, by a small mound which may have been the founder's grave. The cross was moved inside the chapel to protect it from the weather, and a simple replica cross erected to mark its original location.

The upper part of the cross head shows St Michael atop a serpent, while below is a figure of Christ in Judgement. Around the centre are four birds, probably symbolising the Four Evangelists.

As for the chapel itself, it was dedicated to St Charmaig (Cormac) and is a simple rectangle measuring 43 x 20 feet externally, with a blocked south doorway and a round-headed east window. The modern roof has translucent skylights to allow visitors to more easily view the carved cross and grave slabs within.

The lack of any separation between nave and chancel is a common feature of churches in this region of the West Highlands. Aside from three aumbreys (small cupboards) in the east wall, there are few interior features. The altar foot was found buried in rubble during restoration work. The chapel fell out of use after the Reformation and saw use as a burial enclosure until it was restored in the late 20th century.

Keills is out of the way, and you have to make a concerted effort to get there, but I highly recommend making the effort; the carved slabs are reason enough for a visit in themselves, the location is fabulous, but the Keils Cross is a wonderful example of West Highland sculpture, and well worth taking a trip to see.

Nearby accommodation is calculated 'as the crow flies' from Keills Chapel. 'Nearest' may involve a long drive up and down glens or, if you are near the coast, may include a ferry ride! Please check the property map to make sure the location is right for you.

More self catering near Keills Chapel >>