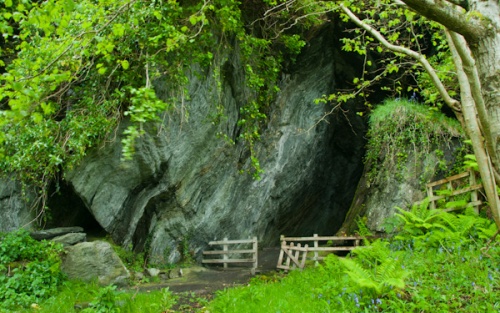 If you take the minor road off the B8024 at Achahoish, following the northern shore of Loch Caolisport, after 4 miles or so you will come to a signposted trail to St Columba's Cave. Follow the short path past the somewhat overgrown ruins of a small 13th-century chapel and you will come to a natural cave beneath an upturned rock face.

This cave is traditionally said to have been a cell occupied for a time by St Columba on his way from his home in Ulster to his final settlements at Dunadd and Iona. The story goes that Columba applied to King Conal for permission to establish his monastery at Iona. While he waited for the king's decision, the saint stayed here, on the south coast of the Knapdale peninsula.

As you enter the cave mouth you will see a raised shelf of rock against the east wall. A drystone altar has been built upon the shelf, and behind the altar, carved into the rock face, is a small cross in low relief, about 17 cm x 14 cm.

To the north of this cross is another, Latin-style cross (a cross with equal length arms in all directions) surrounded by an odd series of five pits in the rock face. There is another, very faint cross carved into the rock even further to the north, but this is very hard to find (I didn't manage to locate it).

The cave measures roughly 18 metres deep and five metres across the mouth. Excavations found two burial sites of indeterminate date outside the cave mouth, but there is evidence that the cave was in use as far back as the Mesolithic period. The font at Achahoish church is said to have come from the cave. To the west of the main cave is a much smaller cave which shows signs of being used as a dwelling place.

Did St Columba stay here? There's simply no way of knowing. All we can really be sure of is that the cave was used for human habitation at various points over the course of thousands of years.

There's no reason to doubt that Columba 'could' have stayed here, though, but nor is there any compelling evidence to suggest that he actually did, beyond local tradition. The location is superb, however, and the views over the loch from the road are wonderful. 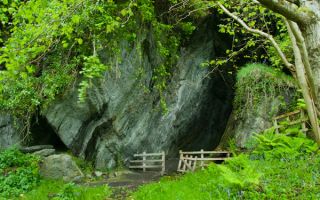 Nearby accommodation is calculated 'as the crow flies' from St Columba's Cave. 'Nearest' may involve a long drive up and down glens or, if you are near the coast, may include a ferry ride! Please check the property map to make sure the location is right for you.