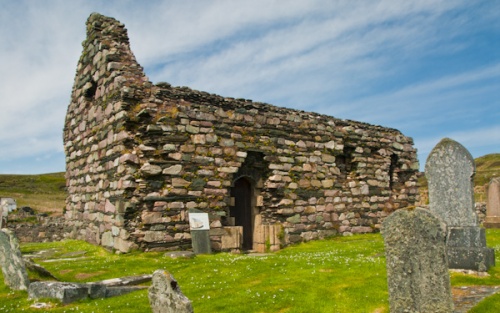 The little medieval chapel at Kilmory Knap holds a treasure-trove of beautifully carved Early Christian cross-slabs and later West Highland grave slabs mixed with examples of early medieval sculpture. The chapel, which is dedicated to St Mary, was never a church in its own right, but a subsidiary chapel to Keills, across Loch Sween.

Kilmory Chapel probably dates to the late 13th century and was substantially unaltered by the time it fell out of use after the Reformation. It was then used as a roofless burial enclosure until it was reroofed in 1934 to act as a shelter for the wonderful Early Christian cross-slabs, with the addition of 14th-16th century crosses and medieval graveslabs gathered from the churchyard.

Nothing remains of the interior furnishings of the chapel beyond a simple aumbry (cupboard) set into the east wall.

In total there are 36 stones collected inside the chapel, each individually numbered, with signs giving historical details about each stone. Some were crafted locally, while others may have been made as far away as Iona while others were by the Loch Awe school of stonemasons who were active throughout Argyll from the 14th-15th century. At least seven of the stones are adjudged to date to before 1000 AD.

The variety of carving is quite amazing. There are raised effigies, incised likenesses of knights, hunting scenes, and animals ranging from dogs to fish, lions, birds, otter, and stags. There is a beautifully crafted galley thought to indicate ties to the Lords of the Isles. Several carvings show tools and implements from daily life, including an anvil, comb, shears, and a hammer. And, as usual, many of the slabs show weapons such as spears, swords and battle-axes. 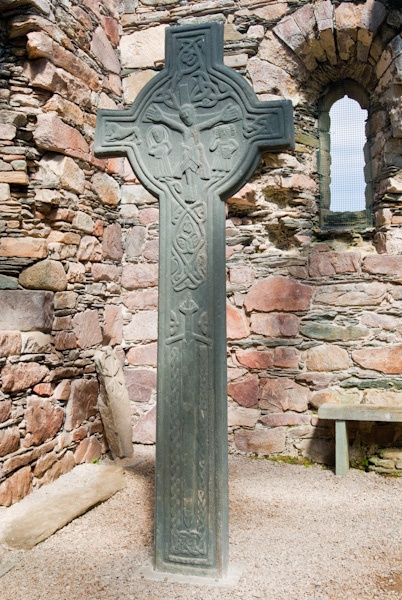 Though there are some very fine examples of carving at Kilmory Knap, the prize is undoubtedly Macmillan's Cross, a wonderfully carved medieval cross that must stand as one of the historic highlights of Argyll (for another candidate see the Kildalton Cross on Islay).

The cross was commissioned by Alexander MacMillan of Castle Sween in the late 15th century, a fact supported by an inscription in Latin on one face which reads '+hec est crux Alexandri Macmulen'. The carvings on MacMillan's Cross show a Crucifixion scene on one face and a hunting scene on the other.

The Crucifixion is in traditional style, with Christ on the cross flanked by figures of Mary and St John. The quality of the carvings is quite wonderful, and they have stood up to the passage of time superbly. The cross stood for many years in the churchyard but was moved inside the chapel in 1981 to preserve it from the effects of weathering. The original base still stands in the churchyard.

As for the chapel itself, it is a simple rectangle, similar in style to many others throughout the West Highlands. It measures 38 x 17 feet inside, with a pair of round-headed lancets in the east wall. The church at Kilmory was linked to the chapel on the small island of Eilean Mor, visible in the Sound of Jura to the west.

The quality of the carved stones at Kilmory Knap makes it well worthwhile taking the time to travel to this out-of-the-way location - and the scenery is marvellous; in common with Argyll as a whole! 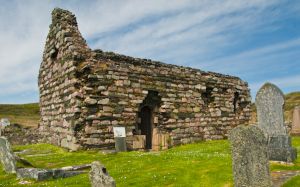 Nearby accommodation is calculated 'as the crow flies' from Kilmory Knap Chapel. 'Nearest' may involve a long drive up and down glens or, if you are near the coast, may include a ferry ride! Please check the property map to make sure the location is right for you.