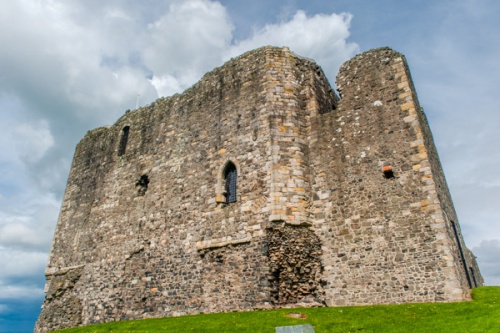 Standing on a soaring motte high above the village of Dundonald is this large stone keep, built by Robert II around 1371 to mark his ascension to the throne of Scotland. Dundonald was Robert's favourite royal residence and it was here that he died in 1390.

The name 'Dundonald' translates as 'the fort of Donald' and gives a clue to the ancient origins of the site. The first evidence of occupation comes from the late Bronze Age (1500-500 BC). An Iron Age hillfort was established here, from the period 500 BC - 600AD.

The fort was fairly rudimentary, with a cluster of round timber buildings atop the rocky hilltop. Late in the first millennium the hill-fort was enclosed by a low stone wall and the timber buildings became square or rectangular. 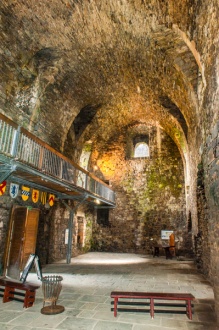 It was probably at this time that the fort gained its name 'Dundonald', probably in reference to a king named Dyfnwal, who ruled this area of Strathclyde. Unfortunately, there were no less than four kings with the same name, the earliest reigned in the 8th and the last in the 10th century, and we do not know which Dyfnwal the castle is named after.

In the middle of the 12th century an earthwork and timber fortress replaced the earlier Iron Age enclosure. This first real 'castle' was probably built by Walter FitzAllan, the first Steward of Scotland.

This timber fortress was replaced in turn by a stone castle around 1260. The builder was probably Alexander, the 4th High Stewart of Scotland. Alexander's castle was badly damaged during the Scottish Wars of Independence and was finally rebuilt by Robert II to create the castle we see today.

In 1482 James III sold Dundonald to the Cathcart family, and from them it passed to the Wallace family in 1526. By the end of the 18th century, it was in ruins and is now administered by Historic Scotland.

Robert II's castle is essentially a massive tower house, standing 3 storeys high. One unusual feature is that there are two feasting halls, The Laigh Hall, and Upper Great Hall. These are directly over a storage area on the ground floor.

To the south is an extension which may have provided private accommodation for the royal family, away from the bustle of the upper hall. Below the living quarters is a bakehouse area and beyond this were ancillary buildings including a stable, brewhouse, and smithy.

The upper hall is roofless but retains lovely ribbed vaulting. The vaulting was purely decorative and did not serve to hold up the roof. By contrast, the Laigh, or lower hall, has a very nice vaulted ceiling. On the west face of the tower house are armorial panels carved with the Stewart and Scottish royal arms.

Linked to the upper hall by a stair is a dark and gloomy dungeon and set into the floor of the dungeon is an even more ghastly 'oubliette', a pit prison. You can ascend to the upper hall for wonderful views over the surrounding countryside, and there are information panels around the site to explain how each of the major rooms was used.

I'm not usually one for visitor centre exhibitions, preferring to dive right in and start exploring a historic site, but in this case, I must mention the Dundonald visitor centre. They've done an extremely good job telling the history of the site, and showing with scale models how the site developed from the Iron Age dun, through the various medieval fortresses, to Robert II's castle that we see today.

The models really do give an excellent visual idea of how the castle looked at each stage of its development and helped me appreciate the site when we finally made the climb to the castle itself. 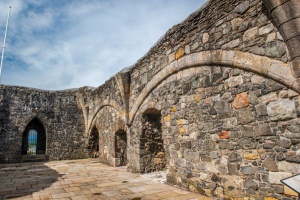 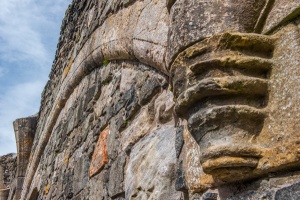 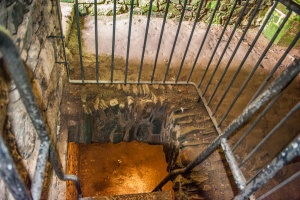 The pit prison, or 'oubliette' 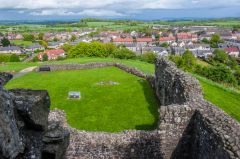 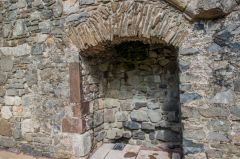 Nearby accommodation is calculated 'as the crow flies' from Dundonald Castle. 'Nearest' may involve a long drive up and down glens or, if you are near the coast, may include a ferry ride! Please check the property map to make sure the location is right for you.

More self catering near Dundonald Castle >>