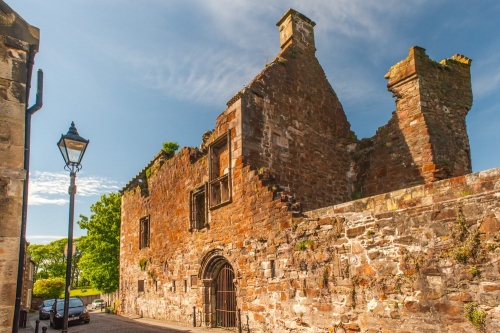 Seagate Castle is a fortified mansion built by Hugh Montgomerie, the 3rd earl of Eglinton in 1565. It is the third castle on this site near the River Irvine and is the oldest structure in Irvine. The first castle was built sometime before 1184 by the De Morville family and was made of timber.

In the late 13th century this timber fortress was rebuilt in stone as part of Alexander III's coastal fortification scheme. It featured a high stone tower, intended to protect Irvine harbour. Around 1361 the castle became the property of the Montgomeries, later the Earls of Eglinton.

The third castle was really a mansion, or townhouse, built by the 3rd Earl and intended as a townhouse for his wife Agnes Drummond of Innerpeffray. Hugh and Agnes married in 1562.

Perhaps the newly married couple found the medieval castle too old-fashioned for their needs, for within three years they had the present fortified residence built. You can see the Montgomerie and Drummond coats of arms decorating the ceiling bosses inside the entrance. 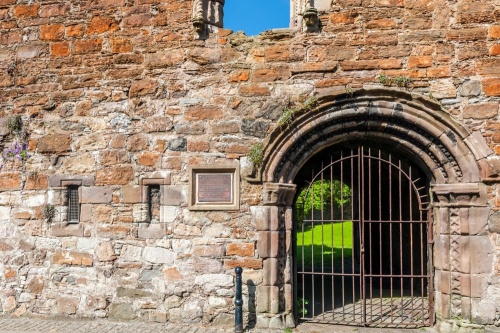 In 1563 the 3rd Earl welcomed Mary, Queen of Scots to Seagate Castle. A plaque on the castle's exterior wall notes that Mary was accompanied by her 'Four Maries'; Mary Seaton, Mary Beaton, Mary Fleming, and Mary Livingstone.

The castle as we see it today consists of a rectangular building facing onto Seagate with three towers. One of these towers is triangular and the other two are circular stair towers (one of them barely survives). One of the stair towers rises to a ruined watch-chamber.

The residence is two storeys high and made of mortared rubble with crow-stepped gables at each end. The ground floor is vaulted for its entire length. 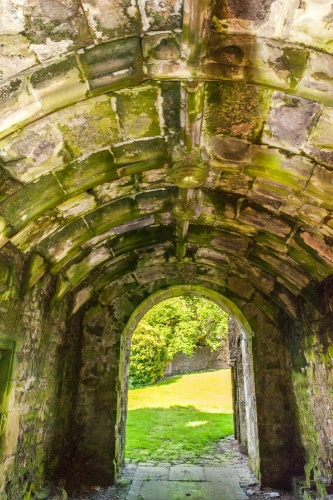 There is a large medieval doorway in the centre of the facade facing onto Seagate. A vaulted passage, or pend, leads from this doorway to a rear courtyard. On either side of the passage you can see guard chambers. There is a kitchen in the north of the ground floor. The chamber over the kitchen featured a trap door leading to a pit prison built into the thickness of the wall.

The entire site measures roughly 30m x 12m, rising to 10m high at the wallhead and 12m to the gables.

Seagate Castle served for many years as a dower house for the Montgomerie family. It fell out of use in 1746 when the roof was removed by the 10th Earl of Eglinton. The roof timbers were reused to help build a church at Ardrossan.

It lay crumbling into ruin for many years until it was given to the Burgh of Irvine in 1945 and is now owned by the North Ayrshire Council. It is not generally open to the public but you can get a very good look at the entrance on Seagate, just off Castle Street. Seagate Castle is just a short walk from the Irvine Burns Club. 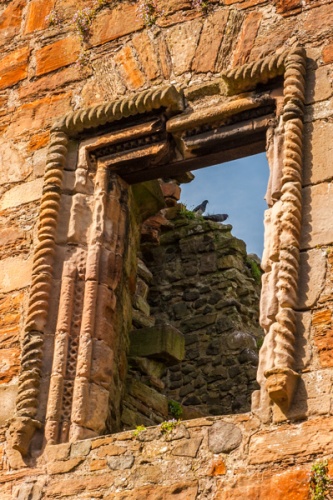 Decorative window on the entrance facade

An old folk tale suggests that a secret tunnel runs from Seagate Castle to Stane Castle, a mile east of Irvine.

The castle is easy to find. It faces onto Seagate, just off Castle Street and Eglinton Street (A736). There is no dedicated parking, but we were able to find a space on Burns Street/Eglinton Street. 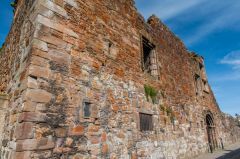 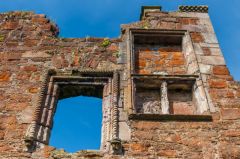 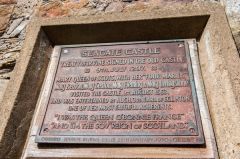 Nearby accommodation is calculated 'as the crow flies' from Seagate Castle. 'Nearest' may involve a long drive up and down glens or, if you are near the coast, may include a ferry ride! Please check the property map to make sure the location is right for you.

More self catering near Seagate Castle

Self Catering near Irvine