HERITAGE HIGHLIGHTS:   Site of the famous Eglinton Tournament in 1839 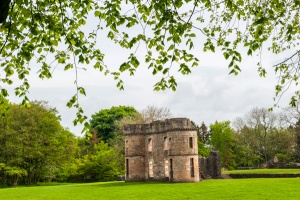 The ruined walls of Eglinton Castle

The ruins of Eglinton Castle now stand like a romantic folly in the middle of a country park, but this was once an imposing stately home, the family seat of the Montgomeries, Earls of Eglinton.

The Montgomeries were one of William the Conqueror's most powerful allies at the time of the Norman Conquest in 1066, and after William's success at the Battle of Hastings, his Montgomerie allies gained huge swaths of land across England and into Lowland Scotland.

For the next 500 years, the Montgomeries and 'Eglintoune' family held the lordship of Eglinton. Several of the family played prominent parts in historical drama; Sir John de Montgomerie acted as a hostage for James I when the king was ransomed from English captivity. The king proved less than grateful, and Sir James was arrested by monarch just two years later.

King James' son, James II, named Alexander, 1st Lord Montgomery, as Lord of Parliament and Privy Councillor. The 3rd Lord Montgomerie supported James IV in his struggle for power with his father and as a result, the young king raised him to the status of Earl.

Hugh, the 3rd Earl of Eglinton was one of those Scottish nobles who accompanied Mary, Queen of Scots on her arrival from France in 1561, and he later fought for her son, James VI. The 6th Earl was a prominent Covenanter and earned the nickname Greysteel for his battle prowess

His son and heir, Hugh, fought for Charles II at the Battle of Worcester in 1651 and was captured by the English. His Eglinton lands were forfeit but were restored when Charles came to the throne in 1660. 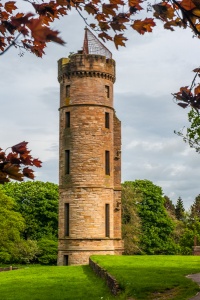 A new residence at Eglinton was begun in 1797 by Hugh, the 12th Earl. He chose to build his grand new house in the style of a medieval Gothic fortress, with four towers surrounding a central rounded keep.

The Earl chose architect John Patterson to carry out his ambitious plan. Patterson had trained with Robert Adam, and was familiar with neo-classical and romanticised Gothic style. The castle was complete by 1802, and despite the name, was not castle so much as a castellated folly; a country residence in the style of a fairy-tale castle.

Hugh was constantly being drawn into extravagant investments, including sinking a lot of his family's fortune into a canal between Glasgow and Ardrossan.

If the 12th Earl was not known for guarding his wallet, what can be said of Archibald, the 13th Earl of Eglinton? Famed for riotous living in his youth, Archibald came of age in 1837 and took control of his family estates. Would the added responsibility bring a sense of soberness and restraint? Not a bit of it!

The 13th Earl is known to history for one extraordinary gesture; the Eglinton Tournament of 1839.

When Queen Victoria took the throne in 1838 the country was in dire economic straits; the government was in debt, and decided that the extravagance of George IV's coronation 18 years earlier simply could not be repeated. The scaled-down coronation ceremony was ridiculed in some social circles, and came to be called 'The Penny Coronation'. 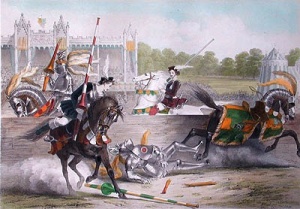 Jousting at the Eglinton Tournament

One of the fiercest critics of the penny-pinching was Archibald, the 13th Earl. A keen sportsman and a romantic, the Earl decided on a grand gesture, an opulent example of pageantry in the style of a medieval tournament, complete with full armour, a grand procession on horseback, and Tilting at the List.

The Earl invited the brightest lights of European nobility to his tournament, many of them his youthful drinking companions. The Earl planned on accommodating about 2000 visitors to his tournament, with perhaps a few thousand of the lower classes admitted to the Eglinton estate to watch at a safe distance. But he was not prepared for the extraordinary public response.

Over 10,000 people applied for tickets. How to decide who should get a ticket? One criteria was easy; the Earl was a staunch conservative, so when one applicant's request was written in blue 'Tory' ink, they got a ticket, and known Whigs or radicals were rejected.

How successful were these attempts to keep attendance under control?

Not successful at all. Some estimates suggest that in the end over 100,000 people attended the Tournament. Local inns could not handle the numbers, and some booked rooms were seized by force. The Minister of Irvine church enterprisingly rented out his Manse.

By coincidence the new rail line from Ayr to nearby Irvine was opened only 3 days before the Tournament opened on 28 August, 1839. On the first day, the new rail service carried almost 3000 passengers to Irvine to view the festivities. Steamships brought visitors from Liverpool and Glasgow. 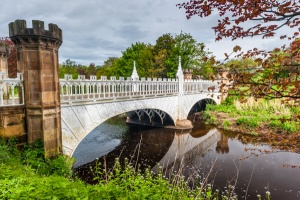 Picture the scene; banners flying, marshalls leading a procession past temporary grandstands with a Royal Box and Pavillions reminiscent of a medieval extravaganza. Participants were dressed in medieval-style armour, some of it specially made for the event, while attendants were dressed in medieval clothing, as were many of the spectators. Following the Procession from the Castle was a Joust, or tilting with lances.

During the Jousting only one combatant, Lord Eglinton himself, managed a clean strike on the shield of his opponent. Unfortunately, foul weather caused the entire second day of the Tournament to be cancelled.

The highlight of the third day was a Melee, or mass fight, followed by a Ball in the evening. To no one's surprise the overall winner of the Tournament was judged to be Lord Eglinton himself, and his defeated foes contributed money to commission a silver trophy, which was so ornate that it took almost 4 years to finish.

To be fair to the 13th Earl, he reformed his spendthrift ways following the Tournament, and in later years seems to have been highly regarded by his tenants and among society at large.

The Tournament is the most colourful episode in the long history of Eglinton Castle, but there is only one tangible reminder of the Tournament to see today. That is the ornamental Tournament Bridge, which crosses Lugton Water a short walk from the castle site.

The bridge is a wonderful, romantic piece of Victorian engineering, but it was not in existence after 1845, long after the Tournament itself - it replaces earlier bridges which carried 'knights' to the jousting ground, but its romantic style is a reminder of the 1839 medieval festival. 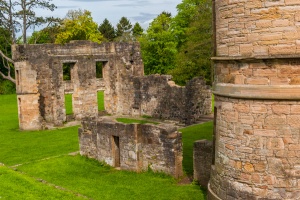 Remains of the castle

The Eglinton's lost their fortune in an ambitious scheme to build a new harbour at Ardrossan, and the castle was abandoned. It was left to decay, and in 1925 the roof was removed so the walls could be used for target practise by the military.

The tottering shell of the house was pulled down in 1973, leaving only a single corner tower and a small section of exterior wall, beside straggling remains of foundations.

It is a tantalising set of remains, just enough to make you wonder how grand the castle would have looked at the time of the great Tournament, when the great and the good of Europe flocked here to take parkt in Lord Eglinton's gesture of romantic extravagance!

The country park doesn't really promote the castle a lot, rather focussing on family activities, camping, and walks in the park. That's understandable, but it does mean that there isn't much information at the site itself.

There is an exhibition at the park visitor centre which gives a brief overview of the castle history and the estate, and a lot of information on the Eglinton Tournament, but we found the exhibition rather jumbled and hard to follow in a coherent way. That said, it did help drive home just how big an event the Tournament was and what an impact it had at the time.

You can walk to the castle directly from the visitor centre following signed trails, but its a lot easier if you get one of the free leaflets with a printed map of the park, as the trails aren't that simple to follow.

I highly, highly recommend good waterproof footwear; we visited after a period of rain, and I assumed - wrongly - that the trails around the park would enable me to easily keep my feet dry just by keeping to the path. I was dead wrong, and I got soaking wet feet, so learn from my mistake!

Image of the Eglinton Tournament is a public domain image, from a print by Edward Henry Corbould. 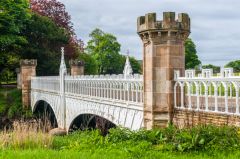 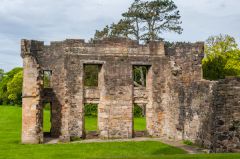 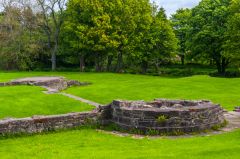 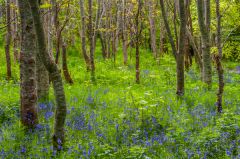 Nearby accommodation is calculated 'as the crow flies' from Eglinton Castle. 'Nearest' may involve a long drive up and down glens or, if you are near the coast, may include a ferry ride! Please check the property map to make sure the location is right for you.

More self catering near Eglinton Castle