HERITAGE HIGHLIGHTS:   One of the best collections of original Robert Burns manuscripts in the world 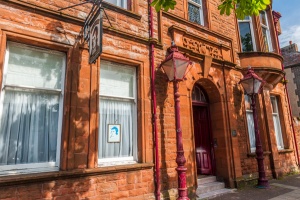 Robert Burns came to Irvine in 1781, not for his poetry, to learn practical skills associated with working flax. Burns was a farmer first and foremost, and he wanted to learn flax-heckling, or preparing flax fibres for use in manufacturing. The adventure did not begin well, for Burns became seriously ill with fever - a fever which may have precipitated his death at a fairly young age some years later.

While in Irvine, Burns made several influential friends, among them a sea captain named Richard Brown. Captain Brown encouraged the young Burns to publish his vernacular poetry, and it was this encouragement that led to the eventual publication of 'Poems Chiefly in the Scottish Dialect'.

Unfortunately, the flax training came to an abrupt end when the shop where he was learning the trade burned to the ground during over-enthusiastic Hogmanay celebrations! The wife of Burns' partner knocked over a candle, and the workshop went up in flames. Burs stayed on in Irvine until the spring of 1782.

Irvine Burns Club was formed in 1826 when 2 friends of the poet joined with 10 others to create a club to commemorate the poet's birth and promote his work. One of the founding members was Dr John Mackenzie, who had treated William Burns, the poet's father, during his final illness.

The first Vice-President was David Sillar, a good friend of Burns and also a poet of some repute. Sillar was one of the members of the Tarbolton Bachelors Club, founded by Burns.

In 1962 the club opened the Irvine Burns & Burgh Museum, where the general public can view the club collection of Burns memorabilia and early published volumes of his work. The museum also displays artefacts relating to the Royal Burgh of Irvine (1372 - 1975), including official Weights and Measures and a Burgh Drum. 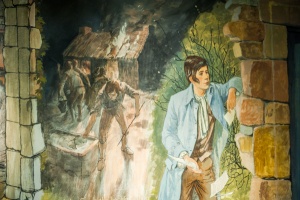 Ted and Elizabeth Odling
mural of Burns in Irvine

The club building is just as interesting as the Burns collections. 'Wellwood' dates to 1903, and has some wonderful historic features. the building was granted to the club in 1962 by a pair of bachelor brothers.

On the stair landing is a wonderful bronze sculpture by Alan Beattie Herriot, DA, ARBS, showing Robert Burns meeting William Wallace - a pair of Scottish heroes meeting across the centuries on the Old Bridge of the town of Irvine.

The large concert room upstairs, where larger gatherings are held, has some lovely stained glass, including a memorial window designed for the 175th anniversary of the club foundation. In the Library is the original painting by CM Hardie of 'Burns in Edinburgh'. The painting has been reproduced numerous ties over the last century for items as diverse as biscuit tin lids and calendar photos, but this is the original work.

This was, without doubt, one of the most enjoyable small historic sites we've ever visited in Scotland. If you love Burns, this is a must-see! We were shown around the club by an extremely knowledgeable guide, who seemed delighted to show off the club and its treasures, but also to tell us about Robert Burns' life and times. 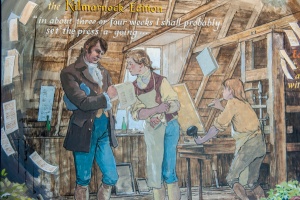 Mural of the Kilmarnock Edition

The visit began with an audio-visual presentation which gave us the historical background of the time Burns spent in Irvine, how he came to learn about flax retting and how the friendships he formed in the town encouraged him to take his talent for poetry seriously as a vocation. The presentation is shown in a room decorated with fascinating murals depicting Burns' life, by local artists Ted and Elizabeth Oding, and another mural by the Odings is a highlight of the first floor exhibits.

One of the funny aspects of the visit was that the guide scoffed at the importance of the other major Burns' sites in Ayrshire, such as the Birthplace Museum in Alloway and the Burns House Museum in Mauchline. He insisted that it was in Irvine that the poet's talent for verse was nurtured and encouraged and that Irvine should receive the publicity now lavished on the other - less-deserving - sites.

It was an attitude we actually found repeated in all the Burns locations we visited around Ayrshire; each location was keen to show how Burns's experiences in that location had really made him the man he became in later life.

Our Irvine guide told us that their collection of Burns memorabilia, including first editions, was so important that members of other Burns clubs came to Irvine especially to see them; and because the Irvine Club attitude has always been that the Burns manuscripts and first editions should be seen and read rather than locked away in safe storage, the club is a popular destination for Burns scholars and enthusiasts from all over the world, who revel in a chance to hold a first edition in their hands and turn the pages of an original manuscript, annotated in the poet's own hand.

Among the many, many Burns objects on show are letters in the poet's own hand, original manuscripts of his poems, copies of both the 'Kilmarnock Edition' and 'The Edinburgh Edition' of 'Poems Chiefly in the Scottish Dialect', and a five volume set of 'Original Scottish Airs'.

Perhaps the most valuable items are six manuscripts sent by Burns to John Wilson, the Kilmarnock printer who prepared the first edition of his work in 1786. The manuscripts detail the first 5 poems in the book, plus the thirteenth.

These 17 folio sheets are thought to be the only surviving originals of the Kilmarnock Edition. In layman's terms, they are the pot of gold at the end of the Robert Burns rainbow for any enthusiast!

The Club is open on designated afternoons throughout the summer months; please see the official website for details.

I can highly recommend the Club website - there's a wealth of information about Burns himself, the Club, and the history of Irvine. 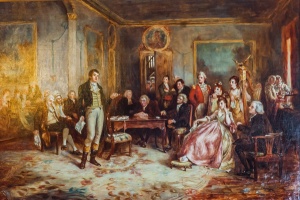 Burns in Edinburgh by CM Hardie 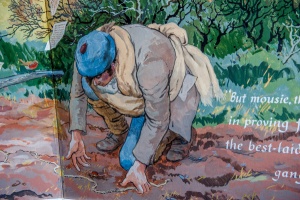 Burns and the mouse 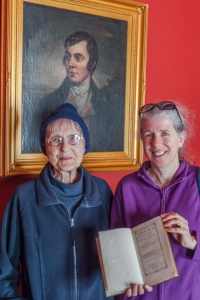 In the Library with a
Burns first edition 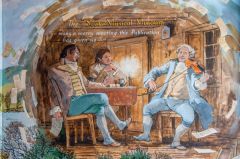 Nearby accommodation is calculated 'as the crow flies' from Irvine Burns Club. 'Nearest' may involve a long drive up and down glens or, if you are near the coast, may include a ferry ride! Please check the property map to make sure the location is right for you.

Self Catering near Irvine