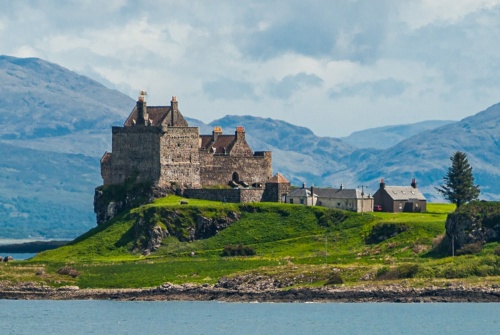 Perched on remote Black Point with spectacular sea views, Duart Castle dates to the 13th century, though it was razed in 1756 by the English. Rebuilt as a home in 1911, and a stronghold of the MacLeans for centuries.

The location is superb, on a narrow neck of land jutting out into the Sound of Mull, at its junction with the Firth of Lorn and Loch Linnhe. The castle was one of a chain of fortifications along the Sound of Mull that acted as signal stations allowing beacon fires to transmit messages quickly from Dunollie (Oban) to Mingary on the Ardnamurchan peninsula.

There has been a fortification on Black Point since prehistoric times, and there was certainly a timber fortification here as early as the 13th century, consisting of a curtain wall cutting off the end of the promontory.

In the 14th century the site fell into the hands of Clan MacLean, and it was probably Lachlan Lubanach MacLean who built the first stone castle keep around 1370. Perhaps it says something about that turbulent era when you realise that the landward defences are the strongest, with walls over 3 metres thick. 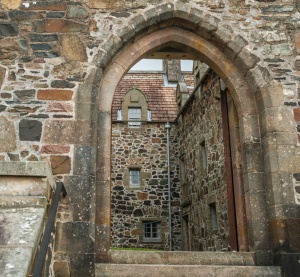 Dark tales cling to Duart - this is the Highlands after all. The headless ghost of Ewan Maclain is said to ride through Glen Mhor to the south of the castle. But that is a relatively inoccuous tale when you consider the most famous episode in the history of Duart.

In the 1520s Lachlan Cattanach of Duart married Margaret Campbell, briefly allying the Campbells and MacLeans. But the marriage proved childless, and Lachlan blamed his wife for failing to produce an heir. He had her chained to a rock in the channel, to let the tide drown her.

A passing fisherman heard the lady's cries and rescued her. In a dramatic (and perhaps apocryphal) episode, Lachlan returned to his hall to find his wife, calmly seated, as if nothing had happened. But the Campbell's plotted revenge, and in 1527 Lachlan was murdered in his bed. The islet where Lady Margaret was chained can be seen offshore; it is now called Lady's Rock. 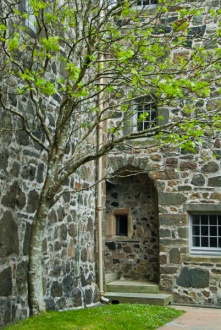 Inside the castle courtyard

The MacLeans were vassals of the Lords of the Isles in 1608 when the clan chief was invited to dine with James VI's Lord Lieutenant aboard a royal ship moored in the Sound of Mull. MacLean was kidnapped and forced to swear an oath of loyalty to the king, and to destroy his own ships. This change of allegiance helped finally break the power of the Lords of the Isles in western Scotland.

The MacLeans supported the royalist Earl of Montrose, and held Duart for the king. But they could not withstand an attack by General Leslie in 1647, and the castle was forced to surrender. Cromwell knew the strategic importance of Duart Castle, and in 1653 he sent ships to besiege the castle. A storm drove off Cromwell's navy and sank two ships, and the castle was saved.

The MacLeans lost more men and a great deal of money by following the royalist cause, and fell into heavy debt, much of it owed to their deadly enemies, the Campbells. Duart was put under siege in 1674 and 1688, and bombarded by Campbell ships. The castle finally fell in 1691.

Duart was garrisoned by royal troops in the 1745 Jacobite Rising, and when the troops finally left in 1751 they burned the castle behind them so it could not be held against the king. The castle remained a desolate wreck until Sir Fitroy MacLean stepped in; between 1911 and 1936 Duart was carefully restored, turning the medieval fortress into a comfortable home.

The castle is a delight to visit. The location is magnificent, and the site is small enough to enjoy in a few hours. There are exhibitions on the long and often bloody history of the site, and on the heritage of Clan MacLean. I found it rather chilling to hear the story of Margaret Campbell and look out the castle window to see the very rock she was marooned on, visible in the waters offshore. History is close to the surface at Duart. 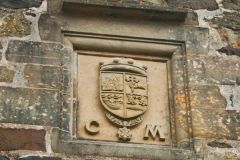 Nearby accommodation is calculated 'as the crow flies' from Duart Castle. 'Nearest' may involve a long drive up and down glens or, if you are near the coast, may include a ferry ride! Please check the property map to make sure the location is right for you.

More self catering near Duart Castle >>