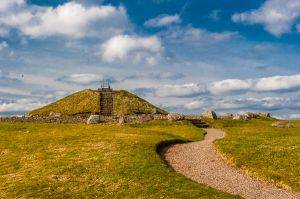 Cairnpapple Hill is an important ritual centre atop a high hill, used for over 4000 years from Neolithic to the early Christian era. Enter a reconstructed Bronze age cairn and see burial cists spanning thousands of years.

Around 3500 BC the summit of Cairnpapple Hill began to be used for some form of ritual observances. A series of small hearths were built, and a number of ceremonial objects brought here, presumably as offerings. Among the objects were axe heads imported from as far away as Wales. The ritual hearths are no longer visible, as they were covered over by later structures.

The second stage of use came around 3000 BC when an oval-shaped henge monument was created, formed of an inner ditch and an outer earthwork bank, with entrances on the north and south sides. The ditch was about 3 feet deep, cut down into the underlying rock, and about 12 feet wide. Inside the ditch was a pair of concentric oval rings formed of timber posts. 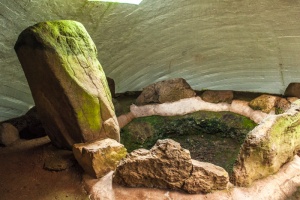 Inside the burial mound

Around 2000 BC a cairn built of clay and stone was built inside the earlier rings. The cairn stood 7 feet high and protected at least one burial. At the head stood a single standing stone about 8 feet tall.

Traces of wooden objects were found with the burial, including remnants of a club and a ritual mask that covered the dead person's face. Beside the skeleton were 2 Beaker pots, which probably held food and drink. Outside the cairn was an arc of 7 pits. Six of the pits held created bones, and a pair of bone pins were found.

Later in the Bronze Age the cairn was covered by a larger cairn about 50 feet wide, bounded by a kerb of upright stones. Within this second cairn were several a burial cists. Still later the entire site was covered in a third cairn, stretching over 100 feet across and completely covering the original henge ditch and bank. Within this third cairn were a pair of cremation burials. contained in upturned urns.

Some time between AD 500 and AD 1000 4 graves were inserted into the east end of the site. These graves were originally thought to belong to the Iron age, but because the graves are oriented on an east-west axis they are now considered early Christian.

The site was excavated in the 1940s. Those excavations have been covered by a concrete dome which attempts to show visitors how the interior of the second cairn looked when built. Within this modern 'cairn' you can see reconstructed graves. Outside this concrete cairn the various phases of burial are exposed, and marked with different coloured gravel to make it easier to understand the chronology of the site.

There are fantastic views from the summit of the hill; on a clear day you can see as far as Arran. There is a modern visitor centre with an exhibition about the history of the site. The cairn is open seasonally, and there are regular guided tours available. 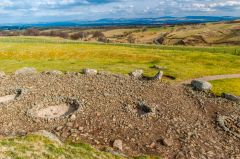 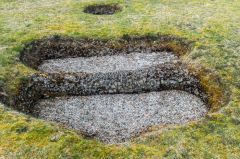 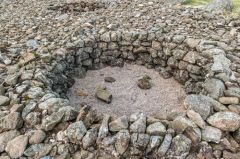 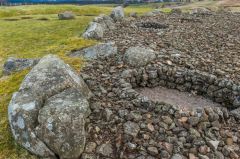 More self catering near Cairnpapple Hill >>