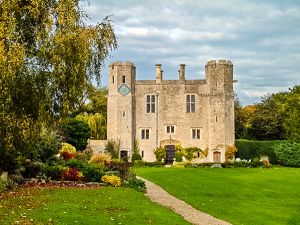 Boarstall Tower
Boarstall is an imposing 14th-century moated gatehouse surrounded by gardens. The exterior chambers are largely unaltered since the early 17th century.
History
Boarstall was built by John de Haudlo in 1312 to defend his fortified manor house residence of Boarstall House. The house itself may have been built by Haudio or by his parents-in-law, the Fitz-Nigel family, who had resided at Boarstall for many years. De Haudio (or his father, also named John) acted as a custodian of Tonbridge Castle in Kent, which might explain why Boarstall Tower looks very much like the gatehouse at Tonbridge, built in 1260.

We presume that the moat that surrounds three sides of the property originally extended to the fourth side, enclosing an area about 3 acres in size. It seems likely that the moat dates to the 13th century, suggesting that there was a substantial manor house at Boarstall well before Haudio built his gatehouse.

Though the gatehouse bristled with defensive measures like arrow slits and crenellated battlements, it was first and foremost a status symbol, a statement of Haudio's wealth and prestige.

The gatehouse was altered in 1615 so it could be used as a hunting lodge, but it retained its medieval defensive features, including a belfry.

The imposing tower is all that remains of Haudio's property. In 1778 the medieval house was torn down on the orders of the owner, Sir John Aubrey. What remains is the tower, and the major attraction here - aside from the moated setting - is that the interior chambers of the gatehouse tower have remained almost completely unaltered over the past 400 years.

More self catering near Boarstall Tower >>

The Angel Restaurant with Rooms - 5.2 miles
Aylesbury, Buckinghamshire
Stay from: £70.00