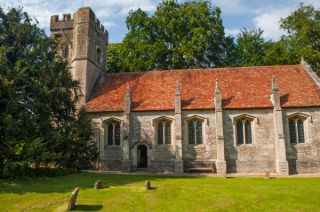 A 15th-century private chapel featuring superbly carved and painted original woodwork. The chapel was built in 1449 by Richard Quatremayne, a close aide to Richard, Duke of York, and later, to Edward IV. It was to serve as a private chapel for Ryecote Palace, now sadly destroyed. The chapel features a musician's gallery and a beautifully carved rood screen. The font is 12th century, salvaged from an earlier church on this site.

This beautiful building is one of the finest medieval chapels in England and has changed so little since the early 17th century that it is like a time capsule. It was built by Richard and Sibyl Quatremains (sometimes modernised to Quartermain) around 1449, however, written records suggest that there was a chapel here at least as early as 1295. The Quatremains paid for 3 priests to say mass daily for the family, and one of the priests lived in the tower. 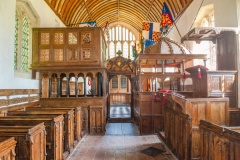 The chapel was not just for the use of the nearby manor house; it also served the local village and travellers on the route between London and Oxford.

In the early Tudor period the manor house was destroyed to make way for a new royal palace. Rycote Palace became an important royal residence, used by a succession of Tudor monarchs including Henry VIII and Elizabeth I. Henry even spent part of his 5th honeymoon at Rycote.

During the reign of Mary Tudor, her sister Elizabeth was held at Rycote as a virtual prisoner under the care of Sir John Williams of Thame. Elizabeth became great friends with Sir John's daughter Marjorie, who married Sir John Norreys (Norris) in 1560. When Sir John died the estate passed to the Norris couple, and it was they who built the ornately carved pew that is one of the historic highlights of Rycote.

After taking the throne, Elizabeth visited Rycote on at least 4 occasions and considered the palace something of a favourite country retreat. The palace is long gone, but the manor house we see today incorporates many of its outbuildings. The Bertie family, later Earls of Abingdon, acquired Rycote in the 1740s, but in 1745 the building was severely damaged by fire. It was rebuilt, but the family fortunes suffered when the 4th Earl spent the family fortune. 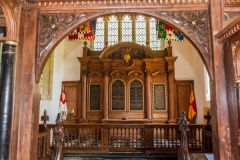 The reredos and chancel screen

The Tudor mansion was finally pulled down in 1807, and the chapel was allowed to decay; the roof leaked, the fittings were rotting, and the cushions were moth-eaten. Yet the chapel vault was still used for family burials by the Earls of Abingdon throughout the 19th century. The chapel's fortunes changed in 1911 when Rycote was purchased by Alfred St. George Hamersley.

The chapel was built in Perpendicular Gothic style and has unusually retained much of its 15th-century character. But it is not the Perpendicular features which make Rycote so appealing, it is the 17th-century additions, including a pair of quite remarkable family pews.

On the north side of the chancel is the Norris Pew, dated to 1610 and surmounted by a musician's gallery. Opposite, on the south side of the chancel, is a quite astonishing enclosed, domed pew, reputedly built for a visit of Charles I in 1625, when the king and his court sought refuge in Oxford after plague broke out in London. Charles came again to Rycote in 1643 and 1645 on his way to his Civil War base in Oxford. The exquisite reredos behind the high altar dates to 1682 and may have been carved by Grinling Gibbons. Among the memorials is an ornate monument to James Bertie, Earl of Abingdon, dated to 1767. 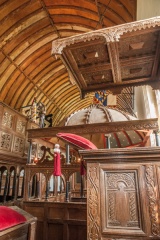 The pulpit and
sounding board

In the churchyard, to the south of the chapel entrance, is an old yew tree, bearing the full weight of centuries. The yew is traditionally said to have been planted around 1135, during the reign of King Stephen, from a seed brought to England from the Garden of Gethsemane in the Holy Land. Its circumference is roughly 26 feet.

Any ancient building seems to attract ghost stories, and so it is with Rycote Chapel. In 1972 the custodian saw a mysterious woman in grey, presumed to be Lady Cecily Heron, daughter of the unfortunate Sir Thomas More. The grey lady has been seen several times since, in the grounds and inside the chapel. A figure of a monk has been spotted under a nearby oak tree, and a 17th-century milkmaid has been seen near the chapel. 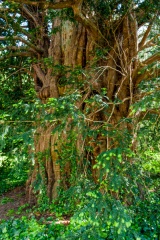 I came on a lovely summer afternoon, and my first view of the chapel peering through the trees, with the rambling manor house beyond, was a thing of beauty. The chapel seems enveloped in a time warp, trapped in the 17th century. There was a woman manning a ticket desk under the tower. She looked rather lonely, and I don't imagine she'd had many visitors to talk to. She asked if I'd like to hear about the history of the chapel and I naturally said yes.

My word; I couldn't have asked for a more knowledgeable guide! She regaled me with stories about the people associated with the chapel, from the Quatremain builders to the Norreys and later Bertie families, each of who left their mark on the chapel. Then she left me to explore.

The chapel is small, just a chancel and short nave leading to a west tower. But maybe because it is so compact, the effect of the woodwork is amplified; the impact is simply stunning. The Norreys roofed pew is an astonishing piece of craftsmanship, and I can't think of another family pew with a musicians gallery on top of it!

If anything, the royal pew opposite is even more stunning. The underside of the dome that tops the pew is ribbed like cathedral vaulting, with the spaces between the ribs painted with stars. The same motif of a starry sky is repeated throughout the chapel, notably under the large west gallery that stands over the tower entry.

It would be hard to find a more impressive collection of historical woodwork than the interior of Rycote Chapel. It is well worth seeking out the limited spring and summer opening times and making a special trip to visit. 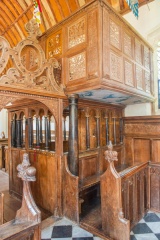 The pew and gallery 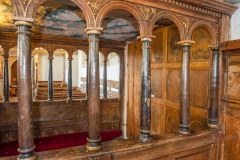 Pew arcading from the chancel 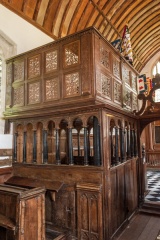 The view from the nave 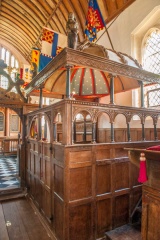 View from the nave side 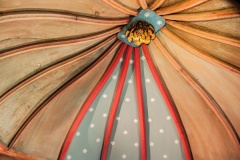 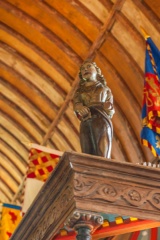 Carved figure on the pew roof 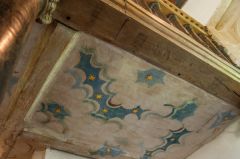 More self catering near Rycote Chapel >>

The Angel Restaurant with Rooms - 3 miles
Aylesbury, Buckinghamshire
Stay from: £70.00