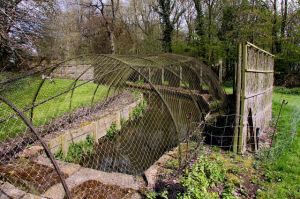 Boarstall Duck Decoy
A rare surviving 17th-century mechanical decoy set in a nature reserve with rare animal breeds. The National Trust gives regular demonstrations of how the decoy, including a dummy human, and dog, were used to lure ducks. There are a nature trail and an exhibition centre on site.
History
The first recorded use of a decoy to lure and trap ducks for food comes from a Dutch engraving dated to 1582. The Boarstall decoy was built between 1691 and 1697 by the Aubrey family of nearby Boarstall House. They trapped ducks not only for their own consumption, but to sell in London and in nearby markets around Boarstall.

The duck decoy remained in use until after World War Two and is now thought to be one of only 4 decoys still surviving in Britain. The decoy is still used today, but not to trap birds for eating; birds are trapped only to be tagged for ornithological study.

The decoy is composed of three long 'pipes' or channels built of nets. The pipes look rather like an elongated version of a lobster trap, where the bird will enter at one end and find it cannot get back out the same way. The decoy worked by setting a fake duck on a small pond to attract wildfowl. A tunnel of wicker and netting shaped like a long cone led from the pond. Once birds had landed, a decoyman used a trained dog to herd the ducks into the tunnel.

One advantage of a decoy over simply shooting the ducks is that the birds did not have pellets or shot in their bodies. Therefore they could fetch a higher price at market.

The Decoy is set in a 13-acre stand of ancient woodland and lakes, with a circular trail leading through the woods, where you can spot numerous species of birds - and bats. The woods are all that remains of the royal hunting forest of Bernwood, and several of the oldest oaks probably date to the last years of the royal forest.

The decoy run by the National Trust and is only a few minutes away from Boarstall Tower, another Trust property, and all that remains of the Aubrey's moated medieval manor.

The Angel Restaurant with Rooms - 5.2 miles
Aylesbury, Buckinghamshire
Stay from: £70.00