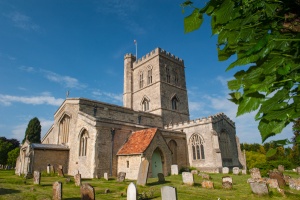 I can think of very few scenes that capture the essence of traditional England more than the view at the end of Long Crendon High Street, looking past the timber-framed medieval courthouse to the beautiful 13th-century parish church of St Mary the Virgin. It's a view that will evoke a sigh of contentment from an inveterate anglophile like me!

There was a church here at least as early as the Norman period, but the lovely building we see today is the result of a complete 13th-century rebuilding when Long Crendon was under the patronage of Notley Abbey.

The oldest part of the building is the chancel, which dates to about 1235, while the rest of the structure dates to around 1265. In 1335 the north aisle was widened and a north porch added. Finally, the striking central tower and west wall of the nave were rebuilt in the 16th century. 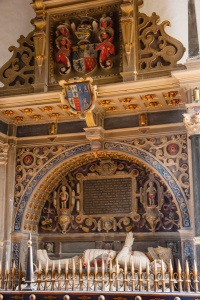 In the south transept (part of the 1265 rebuilding) is the tomb of Sir John Dormer, dated 1627. The tomb was designed by Nicholas Johnson and is set behind a contemporary iron railing. Dormer's effigy shows him as a knight in full armour, set in a classical recess flanked by Tuscan columns. Every surface of the memorial seems to glitter with gilding, and the effect is quite stunning. On the floor are slabs commemorating Jane Burnham (d. 1686) and William Langbaine (d. 1672).

Behind the tomb is a blocked 14th-century window and in the corner are some 12th reset century stones. Also in the transept is a Victorian fireplace. The transept is set off from the tower by a 17th-century wooden screen.

In the chancel your eye will inevitably be drawn to the large east window with its colourful Victorian glass by the Mayer Company. The glass was installed in 1888, but the chancel roof is 15th century and there are 13th-century lancet windows in both side walls. 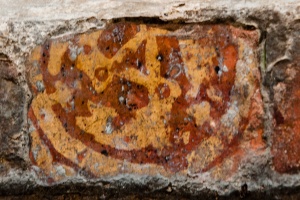 Just below the altar step is an intriguing medieval encaustic tile with the figures of three hares in yellow against an orange background. The tile is probably 14th century, made locally at nearby Penn. If you look closely you'll see that the trio of rabbits share only one set of ears between them.

This stylised portrayal is supposed to represent the Christian Trinity, and was used throughout the medieval period all across the country. However the example here at Long Crendon is thought to be the earliest example in Britain.

In the north transept, separated by a 16th-century screen from the crossing, is a 14th-century window with a tomb recess beneath. Look up at the roof timbers and you will see a wonderful array of grinning faces decorating the bosses.

On the wall is a brass to John Canon (d. 1460) and his wife Agnes (d. 1468) with smaller figures of their 11 offspring. There are also much later 18th-century monuments to the Canon family. One final item of note is a lovely canopied niche in the north aisle, dating to the 14th century and decorated with beautifully crafted foliage carvings.

Most people visit Long Crendon to visit the National Trust's Courthouse, just a stone's through from the church. That's understandable, as the Courthouse is a gorgeous timber-framed building, but don't miss the church! There's a lot of historical interest, notably the Dormer memorial and the curious Three Hares tile. 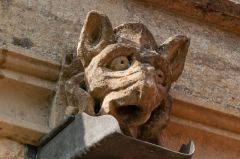 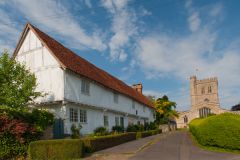 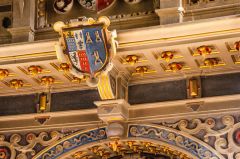 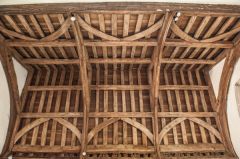 More self catering near Long Crendon

The Angel Restaurant with Rooms - 0.5 miles
Aylesbury, Buckinghamshire
Stay from: £70.00