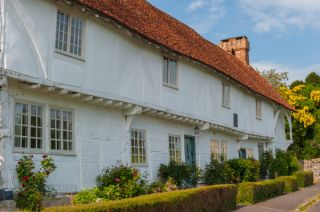 An attractive, thatched half-timbered building dating to the late 15th century. The Long Crendon Courthouse was originally a wool store but was used as a manor court from the time of Henry V to the Victorian period.

The courthouse was built around 1485 at the end of Long Crendon's High Street, just before it terminates at the churchyard gates. The ground floor was intended to provide accommodation for poor of the parish, while the first floor was reserved for gatherings of the annual manorial court. There were three lordships with property in the village, though none had a manor house here, so the manor court fulfilled a vital role in maintaining a semblance of order and local law. In the early 15th century one of the manors in Long Crendon was held by Queen Katherine, wife of Henry V. 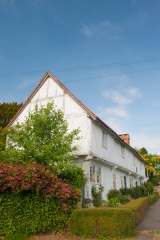 View from the southwest

The court was set up to deal with minor offences, church tithes, and details of tenancy agreements. Among the offences dealt with in the courthouse were crimes such as selling fish that had gone off, and brewing unlicensed beer. Every tenant was required to attend court meetings. One end of the elongated building was used as a kitchen to prepare meals for court members. Court gatherings were held here every year on the Tuesday of Whitsunday week.

In the 19th century the building was used to house the local Sunday school, but by 1890 it was in poor condition and threatened with being pulled down. The local vicar launched a campaign to save the courthouse, and in 1900 it became the second building purchased by the National Trust (the first was Alfriston Clergy House in East Sussex). The ground floor is let to a tenant, so visits are limited to the courthouse itself on the first floor. This is reached via a set of very steep stairs.

It is interesting that the National Trust is not even sure how old the building is. There are no written records, and though the village website suggests a date of 1485, it could, in fact, be as early as the 14th century.

I've been to Long Crendon a couple of times now, and I have to say that the view of the courthouse and the 13th-century church beyond, basking in late summer evening light, is one of the most amazingly idyllic pictures of traditional English village scenery I've ever enjoyed.

The Angel Restaurant with Rooms - 0.5 miles
Aylesbury, Buckinghamshire
Stay from: £70.00