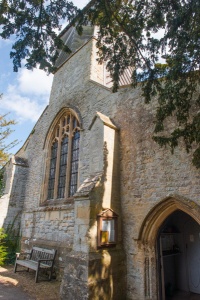 This delightful late Saxon church is tucked out of the way behind the modern visitor centre for Waterperry Gardens. The church was here long before Waterperry Manor and its gardens, however, dating to before the Norman Conquest of 1066.

The only vestige of that Saxon building is the high, rounded chancel arch. The top part of the arch has been filled in to allow a later, pointed Gothic arch, but the rough stone construction of the earlier arch provides a striking reminder of the age of the church.

At the time of the Domesday Book the manor of Waterperry was owned by Robert D'Oilly, who built Oxford Castle. The estate later passed to Luvel de Brai, a grandson of one of William the Conqueror's warriors. 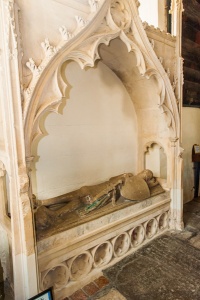 By 1175 Waterperry was in the hands of De Brai's granddaughter Emma Luvel de Peri. A carved stone head set on the north chancel wall may be a likeness of her. Emma gifted Waterperry to Osney Abbey.

The estate later passed to the Fitzelys family, and perhaps the most interesting historical feature in St Mary's is the wonderfully carved 14th-century tomb to Robert FitzElys that is on your right as you enter the church. FitzElys, who died in 1345, was Sheriff of Oxfordshire and Berkshire in 1342 and is shown as a full-sized effigy lying beneath a beautifully carved canopy. In 1994 the tomb was restored.

When the restorers turned over the slab on which the FitzElys effigy rests they found that it was carved with quatrefoils and painted with the FitzElys symbol, the fleur-de-lys. The slab is now displayed at the front of the tomb so the decoration can be viewed. What really struck me was the detail on the carving of FitzElys's armour. The sword scabbard and belt are beautifully detailed. 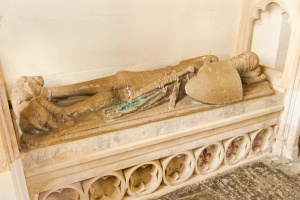 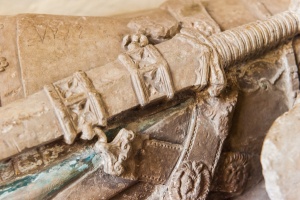 Around 1519 the Curson family came into possession of the manor, and the Curson family tombs are one of the highlights of St Mary's church. A memorial to Francis Curson and his wife is on the south chancel wall, showing the couple facing each other across a prayer desk, where an hourglass stands, a symbol of mortality. Beneath them is a frieze with figures of their 4 daughters and 2 sons. 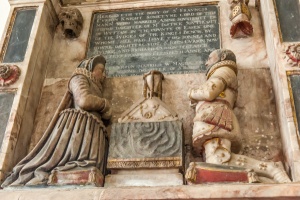 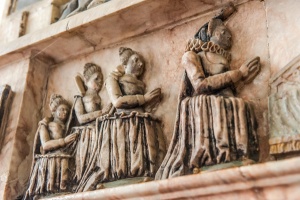 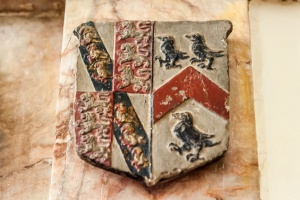 In the aisle is a beautiful brass to Walter Curson (d. 1527) and his wife Isabel under a mat in the aisle. Walter's brass was originally in a London church and used to commemorate a different person.

A plaque on the wall tells a fascinating story of the brass. It was made for Simon Kamp and his wife Margery, who were buried in a London priory church in 1442. In the 16th century, the church was destroyed on the orders of Thomas Cromwell, Henry VIII's powerful minister.

The priory fittings were 'sold very cheap'. One of those fittings was the Kamp brass, which was recarved in honour of Walter Curson and his wife, who were buried in the church of the Austin Friars in Oxford, on the site now occupied by Wadham College.

In 1539 the brass was taken from Oxford to Waterperry, probably to save it from destruction during the Dissolution of the Monasteries.

If you look closely you can see that Walter's feet have been retouched. Isabel Curson's brass is a palimpsest, or reused brass, where the older 15th-century memorial was simply turned over and carved again. Replicas of the Curson brasses are set on panels opposite the FitzElys tomb. 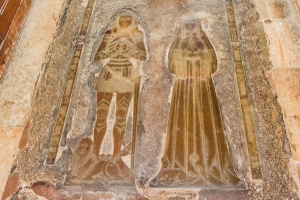 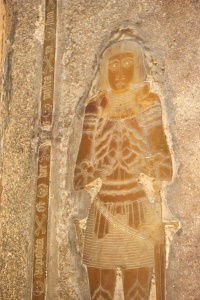 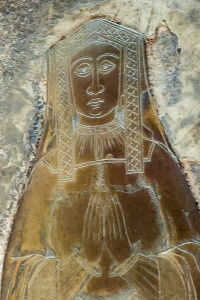 The present Bishop's Palace In the central nave aisle, protected by a carpet, is a brass to Isabell Beaufo, dated 1370. The Beaufo family are known to have owned lands around Waterperry from the late 12th century. In the south aisle is a very worn brass to a son of Walter Curson. 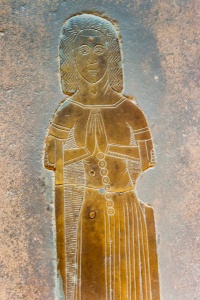 The Curson family retained Waterperry until 1813 when it passed to the Henleys. Joseph Henley was an MP and President of the Board of Trade. A finely carved marble memorial to his daughter, Anna Greaves (d. 1819), sculpted by Francis Chantrey, is one of the interior highlights of the church. The inscription poignantly tells us that she died at the age of 27, leaving behind a six months old child. 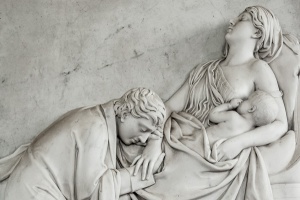 The narrow lancet windows on the north chancel wall at Waterperry boast some of the earliest stained glass in England, dated to around 1220. Most of this glass is grisailles, a style of painted, rather than 'stained' glass. 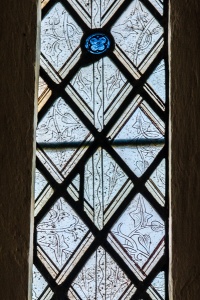 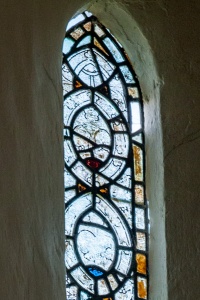 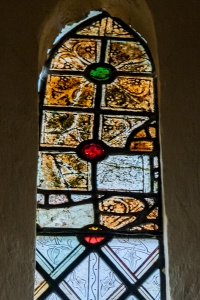 Other interesting glass can be found in the nave; the north window (nearest the pulpit) has a likeness of Robert FitzElys dated 1470. He was married to Margaret Fawkener, who is depicted kneeling with her daughter Margeria.

In the trefoils above their heads are family coats of arms. Still on the north wall, but moving west is a 14th-century figure of Christ in Majesty with two kneeling donors kneeling in prayer. 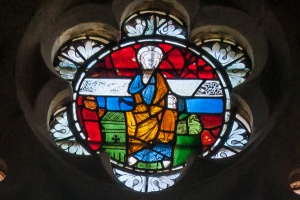 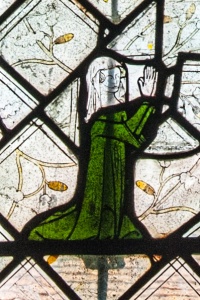 Figure of a window donor 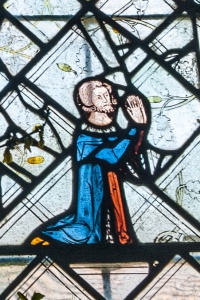 In the window above the FitzElys tomb are Walter Curson and his family, including all 15 children, arranged around a figure of the Virgin and Child. Below each panel is a partial inscription, which taken as a whole reads: 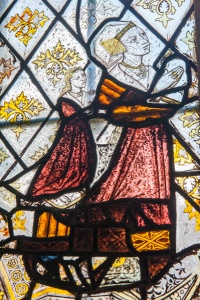 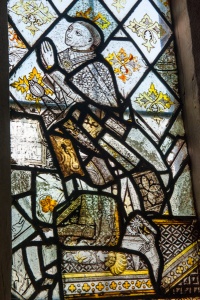 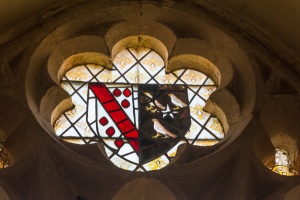 In the west window are more fragments of glass, this time 15th century. You can make out the sunburst symbol of the House of York, a reminder of the Wars of the Roses. There is also a feathered cherubim or seraphim symbol.

One other historical feature is the font, with a simple octagonal bowl atop a round base. The bowl may be 13th century but the base looks much older, though the church guide does not mention it.

Most people come to Waterperry to visit the lovely historic gardens, and that's understandable, for they are quite wonderful. But its well worth exploring St Mary's church; there's a surprising amount of interest in this delightful little church, and the early stained glass, Tudor brasses, and FitElys tomb make it a fascinating building to explore. 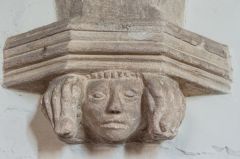 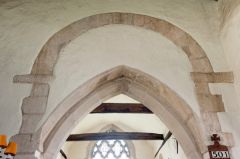 More self catering near Waterperry

The Angel Restaurant with Rooms - 4.1 miles
Aylesbury, Buckinghamshire
Stay from: £70.00

More bed and breakfasts near Waterperry