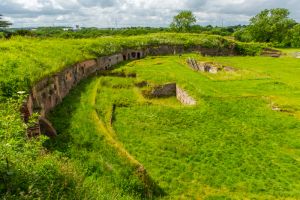 The ruins of Basing House

Basing House was once the largest private house in England. It was built by William Paulet, Marquess of Winchester in the Tudor period, on the site of an earlier medieval castle. The house was besieged and destroyed by Oliver Cromwell in the Civil War.

In the early 12th century the de Port family erected a castle at Basingstoke, surrounded by a system of earthwork banks and ditches for defence. In 1535 Sir William Paulet decided to make use of the castle ruins to build an impressive new house, worthy of his status as Lord Treasurer of England.

Paulet's house was a 'statement'; an imposing mansion, larger than any private house in the realm, with over 360 rooms. Basing House was visited by a succession of monarchs including Henry VIII and Elizabeth I. Queen Mary I had her honeymoon with Philip of Spain here in 1554.

When the Civil War broke out Basing House was owned by John Paulet, the 5th Marquess of Winchester. Paulet supported the royalist cause, which seems appropriate as the Paulet family motto was "Aymez Loyaulte" (Love Loyalty). That loyalty to his monarch was to spell the end of Basing House, however.

Parliamentary troops besieged the house three times. The final blow fell in 1645 when heavy artillery broke down the walls. Parliamentary soldiers stormed through the breaches, and there were heavy losses (estimates range from 40 to 100 dead).

The victorious Parliamentary soldiers ransacked the house, and set it alight. Parliament ordered that the house be completely destroyed, and local people were invited to take stone for building material.

Paulet's estates were seized and he was imprisoned in the Tower of London on a charge of High Treason. The charges were later dropped and when the monarchy was restored in 1660 Charles II returned Basing House to him. The house was too damaged to rebuild, and Paulet's son Charles eventually had what was left pulled down and erected a new house at Hackwood. 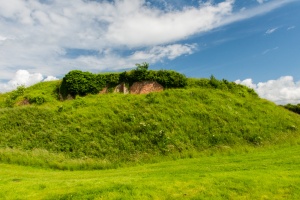 Remains of the castle mound

Visitors can view excavated remains of the Old House and tour the extensive Norman earthworks which surround the site. A modern museum beside the walled garden explores the long and fascinating history of the House and the original castle.

The house isn't well signposted - at least I found it so. I had to stop a pedestrian and ask where to find the House. From the main visitor car park there is a fascinating walking trail beside the Basing Canal that leads to the Great Barn; a huge brick and timber-framed barn dating to the late medieval period. The visitor centre beside the barn has a small museum with finds from the site and a scale model of Basing House.

After visiting the barn and several restored farm buildings you have to follow another path that crosses the main road to the remains of the house and castle. On the way to the site you pass the field where Time Team had a televised archaeological dig to unearth a hunting lodge built by Charles Paulet in 1690.

The House and castle remains are fascinating to explore. There is a viewing platform on the south side of the site that gives a wonderful view over the remains of the House, and there are numerous information panels to explain the site.

Most of the information centres on the Civil War siege of Basing House, how the defenders held out and how the Parliamentary soldiers eventually broke through the walls and sacked the house. You can see the cellars where a group of defenders were trapped and tragically killed in the final assault. Its a really sobering place to explore.

The sheer scale of Basing House is amazing; as soon as you think you've reached the end, there's more to see. William Paulet certainly spared no expense to make a statement of his wealth and status. 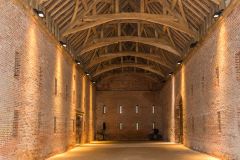 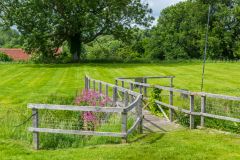 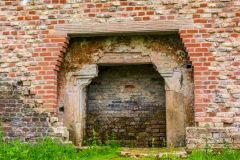 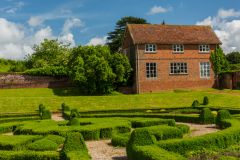 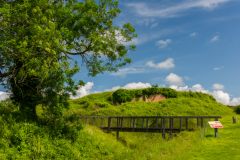 More self catering near Basing House >>