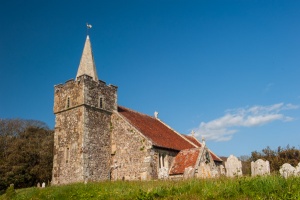 The first church at Mottistone was built in the 12th century by Brian de Insula, lord of Mottistone Manor, which is scarcely a stone's throw from the churchyard. The 12th-century church was greatly enlarged in the mid-15th century by Robert and David Cheke, whose family took over the manor in 1300.

By the time the Seely family purchased Mottistone estate in 1861 the church was in a poor state. The Seely's restored the church but in doing so many of the original medieval features were lost. Much of what remains is an attractive mix of 15th-century work and richly decorated Victorian High Church detail.

The oldest parts of the church include the font, part of which is 12th century, as is the base of the central column in the north aisle. The rest of the arcaded aisles are 15th century, as is the chancel and west tower. A water stoup in the porch is also 15th-century work. 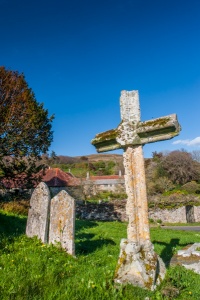 Sailor's memorial cross
in the churchyard

One of the chancel beams is carved with the date 1628, suggesting that the chancel was reroofed at that time. Also 17th century is the attractively carved pulpit. The small chamber organ dates to 1770 and was made by George England.

The chancel is panelled with cedar boards rescued from the wreck of the Cedrine, which went aground at nearby Grange Chine in 1862 while carrying a party of convicts. The story of the Cedrine tragedy is told in an small exhibition area in the chapel.

One of the most interesting features of the church is one of the most recent. In 1948 John Seely erected the parclose screen in memory of his father, General Jack Seely the first Lord Mottistone. The younger Seely was Surveyor to the Fabric of St Paul's Cathedral in London, but his first architectural commission was to rebuild Mottistone Manor for his father. John himself and his wife Evelyn are remembered by an inscription in the south porch.

The finest historical memorial in the church is that of Jane Dillington (nee Freake), who died in 1674. Dillington purchased the Mottistone estate from the Cheke family in 1621.

In the churchyard is a large cross. The shaft of the cross dates to the 15th century and was originally a pier inside the church. It was removed from the church in 1563 and was erected again in 1847 to mark the communal grave of 6 sailors drowned while trying to rescue a ship in distress.

St Peter and St Paul is a pretty church, set in a lovely rural hamlet. If you visit the Manor and its gardens (you should!) then it is well worth exploring the church at the same time. 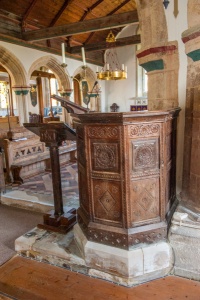 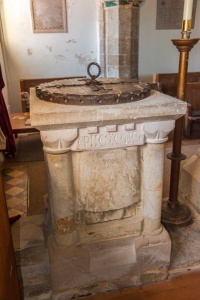 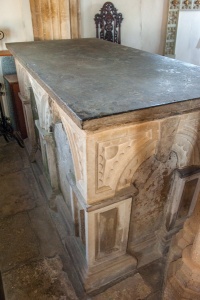 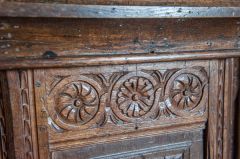 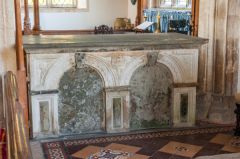 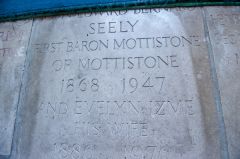 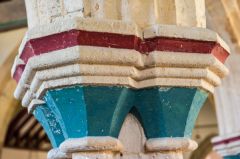 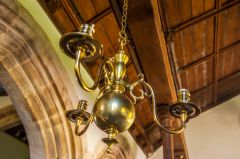 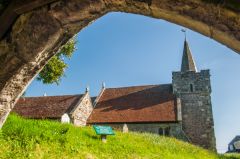 More self catering near Mottistone

More bed and breakfasts near Mottistone