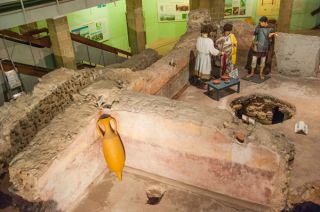 Roman Painted House
The remains of Roman 'mansio', or Official Hotel, dating to at least the 3rd century AD. The remains are surrounded by a purpose-built museum, and show extensive wall paintings and mosaics, a hypocaust (underfloor heating system), and remains of defensive fortifications.
An unusual survivor
Many Roman buildings in Britain had painted walls but very little has survived the ravages of time. It is quite astonishing that so much of the painted walls here have survived, but it took a quite unique set of circumstances to preserve them. Over 400 square feet of wall-plaster survives in its original location, by far the largest area in Britain and arguably the best Roman paintings north of the Alps. So how did the Dover painted walls survive when so little is preserved elsewhere?

The answer lies with the Roman army. In 270AD the army requisitioned the house as part of a new fort wall. They demolished part of the building and built a wall through the middle. Most of Room 3 and all of Room 2 were behind the new wall. The walls were left standing to a height of 6 feet (interior) and up to 9 feet (exterior), while the entire site was backfilled with rubble, plaster, soil and clay as part of the bank supporting the new fort wall. So the painted chambers were effectively sealed, preventing decay from weathering.

When the painted house interior was uncovered by archaeologists, the walls were still much as they had been in 270AD, showing the original Roman designs and colourful pattern of decoration. The painted house is housed in a modern building - or perhaps I should say it is housed 'under' a modern building, for when you enter the museum you find yourself on a walkway looking down into the house and fort walls. Each section of the hose is clearly labelled, and there are information panels around the walls of the walkway to explain the history of the building and exactly what each room was used for. One of the interesting features - apart from the paintings themselves - are the later medieval additions discovered by archaeologists, including medieval pits dug through the floors of the Roman rooms. Thankfully these pits did not impact the paintings on the walls.

After viewing the Painted House from above, you can descend via stairs to the house level and get a closer look at the exterior of the house, the exposed room walls, and the later fort walls and bastion tower foundations. There are several exposed sections of flue, directing heat from the hypocaust system through the walls. So the residents of the Painted House not only had underfloor heating but heated walls as well.

I thought that some of the displays could use a bit of updating, but there is a LOT of interesting information on the house and the span of Roman history in and around Dover. 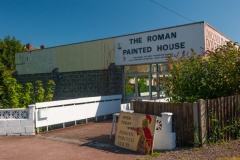 Entrance to the Roman Painted House 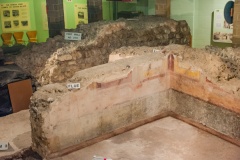 Room 2 painted walls
(notice the flue in the wall cavity) 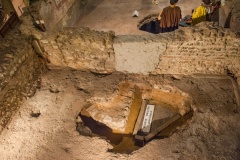 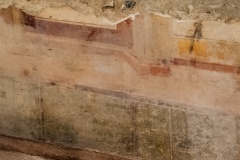 Detail of the wall painting