HERITAGE HIGHLIGHTS:   The iconic White Cliffs are one of the most treasured British sites - and sights! 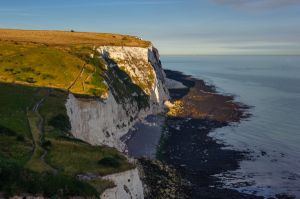 White Cliffs of Dover
The iconic chalk cliffs of Dover are familiar to people across the globe and are one of the most easily recognised of England's natural landmarks. The cliffs and associated coastal landscape are home to an array of rare plants, birds, and animals, and has been declared a Site of Special Scientific Interest (SSSI). The area has also been named a Heritage Coast and an Area of Outstanding Natural Beauty (AONB).

A National Trust visitor centre offers displays explaining the natural history of the cliffs, while a network of footpaths run across the cliffs, providing for stunning coastal walks.

The White Cliffs were formed over the course of several million years from the accumulated remains of millions of small sea plants and animals. The porous nature of the chalk means that it is at continuous risk of erosion from the action of the water, and up to 5cm of cliffs are lost each year.

The cliff face offers roosting territory for a large and varied bird population, and inland of the cliffs is a lovely area of grassland and scrub offering further animal, insect, and bird habitat. It is hard to imagine today, but the clifftops were originally covered with trees. These were gradually cleared away by our ancestors to provide land for cultivation and grazing. 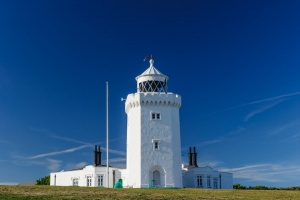 At one end of the White Cliffs is the South Foreland Lighthouse, a historic lighthouse that received the first ship to shore transmission in 1898, and transmitted the first cross-Channel wireless message in 1899. It was also the site of Faraday's first successful electric light. There are guided walks to the lighthouse from Spring to Autumn. There is a signposted walk to the lighthouse, which takes about 45-50 minutes, not counting time taken to stop and enjoy the fabulous views!

Guided tours of the White Cliffs are available from the National Trust visitor centre. There is also a wide network of public footpaths, offering self-guided and signposted trails. The long-distance Saxon Shore Way trail runs along the cliffs as well.

There are two signposted walks from the visitor centre. I mentioned the longer walk to the South Foreland Lighthouse. The other, shorter, walk is to Langdon Hole, a wide bay offering good views of the cliffs to the east. This walk takes about 20 minutes from the visitor centre. The area around Landon Bay is rich in naval archaeology, with several finds of ancient seagoing vessels found in the shallow waters at the base of the cliffs. An information panel explains the archaeological finds.

The White Cliffs are well signposted from all major roads around Dover, and there is plenty of parking in the National Trust car park. Most of the year the car park opens at dawn and closes at 7pm, so be aware of the time! 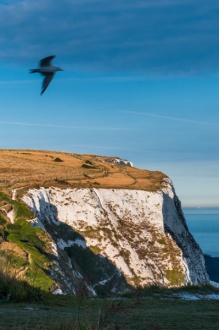 'Seagulls over the White
Cliffs of Dover ...' 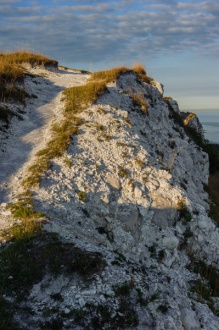 Closeup of the chalk that
makes up the cliffs

More self catering near White Cliffs of Dover >>

More bed and breakfasts near White Cliffs of Dover >>