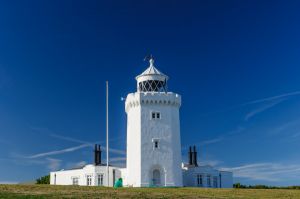 South Foreland Lighthouse
A Victorian lighthouse stands atop the famous White Cliffs of Dover, on the western fringe of St Margaret's village. The lighthouse was the site of several famous scientific breakthroughs; Guglielmo Marconi conducted his wireless experiments here, received the first ship-to-shore radio transmission (a test message from the East Goodwin lightship) and the first ship-to-shore distress signal. South Foreland also received the first international radio transmission in 1899, when a signal arrived from Wimereux, across the Channel in France.

The National Trust has created a replica of the hut that Marconi used for many of his experiments and will be filling the hut with historic radio equipment in an effort to tell the story of how radio developed.

There was a lighthouse atop the cliffs here at least as early as 1730, but the current lighthouse dates to sometime in the 1840s and was built to guide sailors through the Straits of Dover and avoid the perils of Goodwin Sands. We do not know exactly when it was erected, as the records held by Trinity House were destroyed during WWII. The South Foreland lighthouse remained in service until 1988, when it passed to the National Trust.

South Foreland was the first lighthouse in the world to use an electric light, a light that was powered by a steam-driven magneto and made to flash by the use of a clockwork mechanism.

Though the lighthouse can be visited by way of a footpath from St Margaret's village, I highly recommend a longer walk from the National Trust White Cliffs visitor centre, which takes you along the crest of the famous White Cliffs of Dover. The walk will take roughly 50 minutes (my son and I did it in 40 minutes but we were quite keen and scooting along at a good clip!).

Once you've arrived you can see what life was like for a Victorian lighthouse keeper, visit a tearoom made from a Victorian keeper's cottage, and climb 76 steps to the top of the tower for wonderful views over the English Channel to France, 21 miles away. 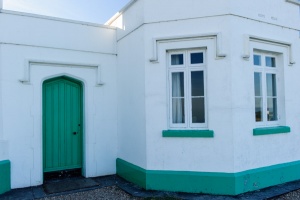 Doorway to the keepers cottage 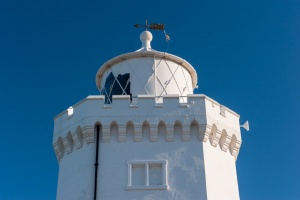 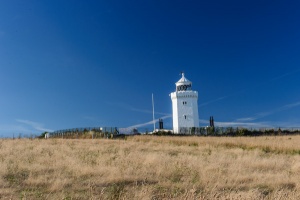 View from the coastal path
along the White Cliffs 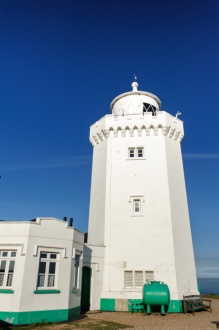 The western side of the lighthouse 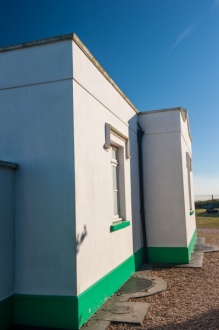 Rear (landward side) of
the lighthouse buildings