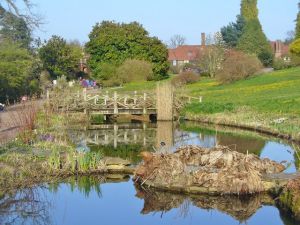 Wisley Garden
The home garden of the Royal Horticultural Society. Established as a woodland garden in 1880, featuring a superb alpine garden, herbaceous borders, and glasshouses.
The RHS operates 4 gardens around the country - the others being at Rosemoor, Hyde Hall, and Harlow Carr - but Wisley was the first RHS garden and is still the most popular. So popular, in fact, that it ranks second only to Kew in visitor numbers for British gardens.

Wisley was established by a Victorian businessman named George Wilson. Wilson was an RHS member, at Wisley he established a 60 acre experimental garden where he tried to find new ways to grow difficult varieties of plants.

After Wilson's death the garden was purchased by Sir Thomas Hanbury, who gave the garden site outright to the RHS. From the original 60 acres Wisley has grown to encompass some 240 acres of formal and informal gardens. There are numerous glasshouses for growing delicate plants, an arboretum, and several small show gardens aimed at illustrating to visitors what is possible in their own gardens.

There is also an active laboratory for experimenting with cultivation methods and varieties, and there is a Trials field for experimental planting.

There are almost too many garden areas to take in, but we'll mention a few of the more popular areas at Wisley. There is a rock garden and alpine meadow, taking advantage of a sloping hillside. There is a wild garden, a canal with water lilies, traditional mixed borders and rose borders, a vegetable garden, Alpine houses, glasshouses for temperate, tropical, and desert plants, a learning centre and laboratory, a pinetum, and the National Collection of heathers.

More self catering near Wisley Garden >>