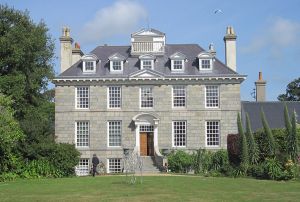 Sausmarez Manor
Sausmarez Manor is a Queen Anne Colonial style house with a history going back to the 12th century. Sausmarez was built in the early 18th century by John Andros, and tours of the house display memorabilia from the Andros and Sausmarez families, as well as the very first Royal Navy uniform.

The Sausmarez family came from Scandinavia, by way of Normandy. From there they moved to Jersey, and then to Guernsey in the first half of the 13th century. The first Sausmarez Manor was built around this time, possibly by William de Saumareis. Only fragmentary stonework from the 13th-century manor house remains, including an outhouse foundation and a doorway arch.

Though one branch of the family later returned to France, the Sausmarez's stayed on in Guernsey, filling important official posts, and 6 members of the family served as Seigneurs of Sausmarez.

In 1557 the direct Sausmarez line died out and the estate passed through marriage to John Andrews, a Lieutenant to the island's governor, who had married Judith Sausmarez. Their son John, now known as John Andros rebuilt the medieval manor as a Tudor house at right angles to the earlier buildings.

A descendant was Sir Edmund Andros, Governor of the Colony of New York, New England, Virginia, Massachusetts, North Carolina, New Plymouth and New Jersey. Andros was responsible for changing the name of New Amsterdam to its current form, New York. Sir Edmund's will required his son and heir, John, to build a new house at Sausmarez within 5 years of his death, or face a hefty penalty of 500 pounds, payable to his cousin! 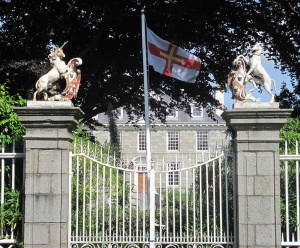 The heraldic gates to Sausmarez Manor

John, perhaps unwilling to face the fine, did indeed rebuild the Tudor house, in the early Georgian style we see today, with grey granite accentuated by reddish quoins. The symmetrical house stands 4 storeys high, with just 2 rooms on each floor. At the top of the house is a windows walk, giving excellent views over the island.

John's heir was Charles Andros, who promptly sold the house back to the Sausmarez family.

One famous member of the family was Captain Philip de Sausmarez (1710-1747), a naval officer who served with Commodore Anson and sailed around the world long before Captain Cook's celebrated voyage.

Philip is credited with designing the first naval uniform, and made a fortune in prize money for his role in the capture of Nusetra Senora da Capa Donga, a fabulously wealthy Spanish treasure ship. Bullion from the ship is on display in the manor house.

Philip was the son of Matthew de Sausmarez, an entrepreneurial man who combined a respectable career as an advocate with the more lucrative life of a privateer, using the anchorage at Freeport in Guernsey as a safe haven for launching raids against French, Spanish, and Dutch ships.

When John de Sausmarez regained his ancestral house from the Andros family he had a paire of ceremonial gates erected, topped by heraldic figures. The gates were designed by Sir Henry Cheers who also designed Philip de Sausmarez's memorial in Westminster Abbey.

The manor was extended in the Regency period by Thomas de Sausmarez, who needed more space for his enormous family. Thomas had 28 offspring, though some died in childhood and not all would have been resident at the same time, so it is easy to see why he needed more space. Very little remains of the Regency addition, for Thomas's heir, General George de Sausmarez, had it pulled down. He remodelled the interiors in Victorian style, adding a wealth of ornate wood carving.

The manor was spared damage during the German occupation in WWII. The Germans would have requisitioned the house, but the last owner, Sir Havilland de Sausmarez, had refused to install electric lights in the house, and as a result the German's did not want the property.

And perhaps to that happy accident of fate we owe the opportunity to visit probably the most interesting historic building in the Channel Islands, a Tudor/Georgian/Victorian house with its roots in the medieval period, full of historic interest and a rich family heritage.

The house is set in a superb subtropical garden, featuring exotic plants such as palm trees, bananas, ferns, and interspersed with quiet jungle glades.

More self catering near Sausmarez Manor >> 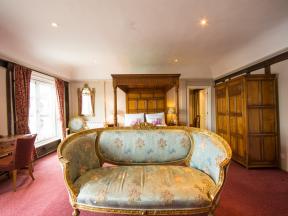