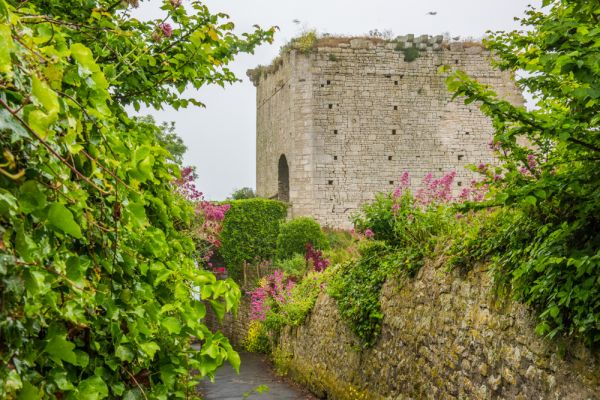 A striking Norman Castle built on a rocky promontory overlooking Church Ope Cove on the Isle of Portland.

Rufus Castle was probably built for King William II (called "Rufus" for his red hair). It is likely that the structure we see today was the keep of a much larger castle. Little remains of that first castle, with the possible exception of the arch that spans the path from Church Ope Road.

In 1142, Robert, Earl of Gloucester, captured the castle from King Stephen on behalf of Empress Maud, and a license to rebuild was granted in 1258. The castle was rebuilt in the 15th century and much of what remains dates from this time.

The castle is constructed in the form of a pentagon, and the 7-foot-thick walls are pierced by numerous loop-holes to allow archers to fire upon attackers. This gives rise to the castle's alternative name; "Bow and Arrow" Castle.

The best views of Rufus Castle are from the shore of Church Ope Cove or the small ledge that houses the remains of 12th century St Andrew's Church, halfway down the cliffs. Access is by a steep stair from the castle viewing platform.

Walking access is via Church Ope Road, off Wakeham Street, Portland. There is free parking in a lot almost opposite, signposted for the Portland Museum and Church Ope Cove. Be wary if you use the official Rufus Castle postcode for a satnav; when we visited our satnav tried to take us much further south towards Southwell and Portland Bill lighthouse.

Don't be fooled; the castle is immediately east of the road to Southwell, near the junction of Pennsylvania Road, Wakeham Street, and Church Ope Road.

If you park in the museum parking area (be careful, it is unpaved, with a rough surface), cross the main road, heading for the thatched Portland Museum building. Turn right in front of the museum onto Church Ope Road, and follow the road as it bends to the left. You will see the castle keep directly ahead of you.

The path passes under an archway beside the museum, and there is a wide viewing area on the far side. From this viewing area, a series of steep stairs lead down to Church Ope Cove. The closest you can get to the castle is the path through the archway, but at least this gives you a good view of the keep from both sides, and the view over the cove below can be spectacular.

More self catering near Rufus

More bed and breakfasts near Rufus